Green and rainy Ireland is short of water, no joke

Following Storm Emma and the Beast from the East Ireland is warned that the country faces a water crisis. 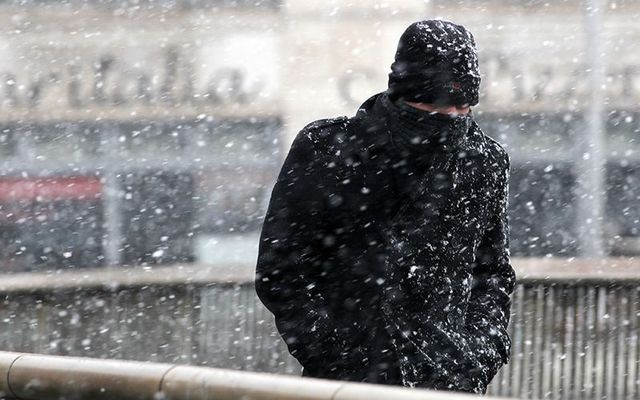 Following Storm Emma and the Beast from the East Ireland is warned that the country faces a water crisis.

It sounded like some kind of an Irish joke.  Storm Emma, with help from the icy Beast from the East, had dumped huge amounts of snow on Ireland, so much that it shut down the country for several days.

But as soon as it was over last week we were being warned that we faced another crisis -- a severe water shortage. Now you don't have to be a science graduate to know that snow melts into water.  So with all the snow we had, how could we possibly be short of water? But unbelievably we were, so much so that water pressure in Dublin last week had to be turned down at night to stop the city running dry and some parts of the country had no drinkable water for days on end.

And it's not over yet -- water supply in Dublin will be curtailed for several weeks to come, and there are still thousands of homes around the country with contaminated supplies. The background to this, of course, is that Ireland is one of the few countries in the developed world which does not charge for water use, and the result is that we have an ancient, failing system that is continually on the brink of crisis due to lack of investment. You will remember that our gutless politicians caved in to populist pressure a couple of years ago and abandoned the proposed introduction of water charges here.  Irish Water, the new national utility which had been set up to replace the fragmented systems being run separately by 30 local councils, was supposed to use the money to invest in the country's crumbling water infrastructure.

But that was scuppered by the failure to introduce charges, and despite assurances that enough money would be provided from state funds only a fraction of the massive investment needed is being made. Now the chickens -- or should that be the ducks? -- are coming home to roost.  As we saw last week, the country's water infrastructure simply cannot cope with the difficulties that a major snowstorm can cause.  And with our growing population here making ever greater demands on the system, the situation is getting more critical all the time. So what happened during Snowmageddon?  In the Dublin area there were two problems.

Water expands when it freezes, which is why pipes burst. The freezing conditions caused burst pipes in many places around the city, with both mains and secondary piping affected.  And finding these leaks underground is difficult and takes time. Much of the system dates from the Victorian era.  The average age of piping in Dublin is 80 years, with many even older cast iron and earthenware pipes that are corroded and collapsing.

There are so many leaks and cracks in the system that it loses around 40 percent of all the fresh water passing through it in normal weather.  The intense freeze during the storm made that even worse. The second problem was that too many people in Dublin were trying to avoid burst pipes in their homes by leaving taps running all night.  Leaving taps running is the traditional way of preventing unlagged domestic pipes which feed attic storage tanks from freezing, and then bursting and leaking down through the house when a thaw sets in. If thousands of homes are doing this, it's a problem.  And so many people were doing it in Dublin that the authorities cut the nighttime pressure for a week.  At the same time they asked people to stop using baths, dishwashers and so on. Around the country there were also problems because the flooding which followed the snow thaw contaminated old water plants which service rural villages and towns.

Again, this is a consequence of the failure to invest in these systems over many decades.  The result was that people in many rural areas last week either had no water or were being told to boil water before use. On a national level, the state of water services in Ireland is extremely poor but the problem is particularly acute in Dublin.  The accepted norm in cities in developed countries is that they have 10 to 20 percent excess capacity over the usual demand level.

In Dublin, with a growing population, we have a two percent margin.  So any weather challenge here immediately becomes a crisis. There is no easy way out of this situation.  Upgrading our water infrastructure, both in Dublin and around the country, is going to cost tens of billions of euro since so little has been spent on it for decades.

The sums involved are so huge they could not be borrowed by the state without affecting the timetable to reduce the budget deficit to the three percent agreed with the EU/IMF under the bailout program.  The solution was to set up Irish Water which could borrow the funds off the state's books and use water charges to repay the money over decades to come. This was torpedoed by a few far left politicians, followed by Sinn Fein and then Fianna Fail who all opposed water charges as a way of undermining the government.  The cynical opportunism involved is something that will condemn people here to living with poor water quality and regular water shortages for years to come. It was interesting that the far left politicians who fronted the anti-water charges campaigns a few years ago were keeping their heads down and saying very little over the last two weeks when the water shortage was affecting Dublin.  Particularly invisible was the most vocal campaigner, Paul Murphy, who won himself a seat in the Dail in 2014 by opposing water charges. The constituency he represents on the west side of Dublin includes the Jobstown area where the then tanaiste and Labour Party leader Joan Burton was trapped in her car for several hours by a mob, which included Murphy, protesting about the proposed water charges at the time.

It also is the area where looters attacked the local Lidl supermarket at the height of the storm when they knew the gardai would be slow to reach them because of the deep snow.  A huge quantity of goods was stolen by the mob, including large amounts of alcohol. The reaction to this here was interesting, with a few liberal commentators trying to minimize the incident by comparing it to white collar crime during the boom instead of condemning it as the outrageous, feral behavior it was. The truth is that Jobstown (or Jobless town as some call it because there are so many people there who don't work even though the economy here is strong again, we have almost full employment, and anyone who wants a job can get a job of some kind) is an example of a particular problem we have in some areas here.

The high level of welfare since the boom days has removed much of the incentive to work and be self-supporting in these areas.  That has been replaced with a sense of entitlement which demands not just water but almost everything else for free from the state and gets very aggressive if the free stuff is not provided. Several people here noted that the attackers who hijacked the JCB to break through the roof and walls of the Lidl supermarket in Jobstown (you have probably seen the video online) should have no problem getting a job if they want one.  The guys who hot-wired the big machine clearly have a future as electricians.

With construction taking off here again and a shortage of workers, whoever was driving the JCB will be in big demand.  And all the rest of the mob has clearly shown their ability as demolition workers!