The mess all our politicians have made of this over the last decade proves they are incapable. 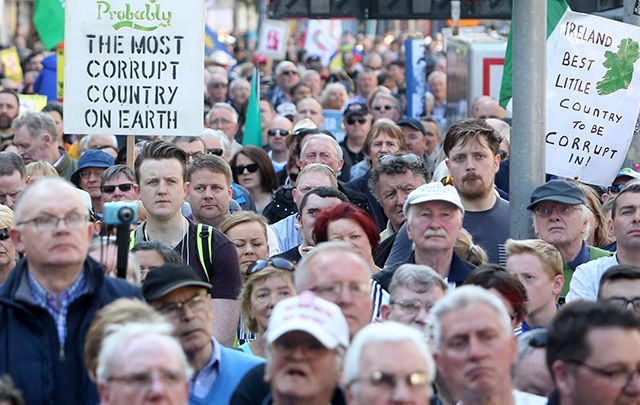 So now we know.  Last week's "fix" on the contentious issue of payment for water services has shown that the current crop of Irish politicians is incapable of running the country. That might seem to be an extreme judgment, but it's true nonetheless.

There's a pair of them in it.  The present Fine Gael-led minority government relies on the support of the main opposition party, Fianna Fail, for its survival.  They hammered out an agreement between them to facilitate this when the government was formed last year.

Running the country properly in these circumstances requires the two big parties to work together and reach a consensus on difficult issues. It's been called "the new politics,” and it means being brave enough to show leadership and to take decisions that are necessary for the good of the country.  Even decisions that are unpopular with some voters, like payment for water services.

But Fianna Fail is unwilling to do this on water payment because it has become such a hot issue in recent years.  They are afraid it will cost them votes and damage their chances of regaining power.  So instead of doing what is needed for the country they have cynically exploited the issue for their own end.

When the present government was formed last year, a cross-party Oireachtas committee was agreed on the water issue to avoid having to make an immediate decision on water charges.  This followed an expert commission that produced a report for the committee.  All this procrastination allowed the minority government to function, but it merely kicked the watering can down the road.

Now it's crunch time.  Last week, after several delays that threatened to bring down the government, the committee issued its recommendations and they have now been accepted by the Dail and the Cabinet.

Only excess use, defined as 70 percent above the average household use, will be charged for, so only households that use more than 589 liters of water a day (345 x 1.7) will get a bill.  And there will be exceptions for large families and medical conditions.

With such a generous free allowance, only eight percent of households will be liable for water charges.  And when exceptions are made and hardened non-payers are factored in, the real figure for those who will end up actually paying for water here could be as low as two percent, according to one expert.

Which means the claim by our politicians that we are now introducing water charges is completely bogus.  The EU, which requires all member countries to conserve water by having a progressive water charging system, is likely to see through this charade and that will leave Ireland open to massive EU fines.

But leave aside potentially hundreds of millions lost in EU fines.  We should be introducing water charges here not just to comply with the EU Water Directive we signed up to years ago.  We should be doing it because, shamefully, we are the only one of the 35 countries in the OECD that does not charge for water.

We should be doing it because it is the right thing to do and because we urgently need to spend huge mounts of money on our leaking, polluting, water infrastructure.

Much of this water infrastructure dates back a couple of centuries.  It was built by the British and was magnificent in its day but is now falling apart.

We lose around half of the clean water we produce through leaking pipes.  Population growth means that sewage systems can barely cope and overspills are common in bad weather.  Many towns around the country still discharge sewage into rivers, lakes and coastal waters after minimal treatment, or in some cases no treatment.

The only solution to this mess is a unified national water utility (which is why Irish Water was set up) and water charges imposed on all households to pay for investment in the system.  All our politicians know this, but they don't have the guts to follow through on it.

It's not just the sly opportunism of Fianna Fail and Sinn Fein that is the problem.  Fine Gael, by accepting last week's compromise, has shown that it is almost as bad.

It's all about hanging on to power, not sticking to your principles.  As we said above, it reveals that our politicians really are incapable of running the country.

And it's not just last week's fudge that is the problem.  The mess all our politicians have made of this over the last decade proves they are incapable.

Both Sinn Fein and Fianna Fail used to be in favor of water charges.  They both supported the original introduction of EU-wide standards for water infrastructure and water charges.  But these days, of course, they oppose them in a way that is supremely cynical and opportunistic.

It was the last Fianna Fail government which agreed that water should be metered and charged for, like happens in all other European countries.  But once they were in opposition they reversed their position so they could exploit the widespread resistance to the new charges.

And it was the decades of neglect and the fragmentation of services across the 32 local councils that left our water and sewage systems in their present shameful state.

The solution was supposed to be Irish Water, the new national utility that would take over from the councils and start charging and investing.  The fact that Taoiseach Enda Kenny's government made a mess of winning public acceptance for Irish Water does not negate the fact that it is absolutely necessary for the future of the country.

In fairness, it was a difficult sell to a public already weary from the cutbacks and tax hikes after the crash.  Charging for water became the last straw, the one that broke the camel's back.  Although reluctantly accepted by the majority of people, it led to nationwide protests and a campaign that gathered huge momentum and terrified politicians.

And it was in this overheated atmosphere that reality went out the window and political cowardice and opportunism slid in.  Sinn Fein, which had been in favor of water charges, unexpectedly lost a by-election in Dublin South West in 2014 to the far left water campaigner Paul Murphy.  So it reversed its position.

This prompted a further reversal by Fianna Fail, which found itself being outflanked on the issue not only by the far left but by Sinn Fein, which was much more threatening to its vote.  So all responsibility went out the window and water charging became a red line issue for Fianna Fail.

For Fine Gael, desperate to cling to power, the only way out was the abject compromise eventually agreed last week which pretends to introduce water charges but in reality fails to do so.

So where do we go from here?  Half the country now has water meters installed by Irish Water but, apart from new builds, the rest of the homes in the country will not be getting them (for the foreseeable future at least).

So how are we to identify excessive use in these homes?   And are the hundreds of millions spent on putting in meters up to now just money down the drain?

Over 60 percent of people paid their water charges and are now to be refunded.  The "water conservation grant" of €100 given to all households in the country to lessen the impact of the initial bills can be taken back from these refunds.  But even those who never paid their water bills got the €100 check in the post, and there seems little hope of clawing that back.

Irish Water will have virtually no funds from charging.  This will mean that it won't be able to borrow the €10 billion euro that is needed for investment in water infrastructure since it won't have a revenue stream to support that.  So it will need massive funding from the state and these debts will have to be added to the state's books which will have serious consequences for our financial position.

More depressing than anything is the likelihood that investment in water here will grind to a halt and we will be left with the dire situation we now have for years to come.

Two big lies have been told about water here, mainly by the far left and angry marchers demonstrating against charges. The first is the idea that people were being asked to pay twice for water because when the rates (local taxes) which had paid for water services were abolished in the 1970s they were replaced by higher VAT (sales tax).

The truth is that this money was spent on hospitals, education, welfare and many other things instead of water, things that voters gave priority to over the years.  So no, we have not paid for water already.

The other big lie is that because the UN has declared that water is a human right, it must be free to everyone, without limits.  The fact is that producing clean water and managing wastewater costs money, a lot of money.

No one in a developed country like Ireland is ever going to be allowed to die of thirst.  But we all have to contribute to paying for water services and the only way to conserve water and encourage responsible behavior is to charge based on use.

Our politicians know that.  Sadly, they don't have the backbone to do it.  They are incapable of running the country.