A hurling All-Ireland final for the ages

"The mighty fire of Ireland’s greatest game and all it represents to the Irish spirit. It cannot get better than that." 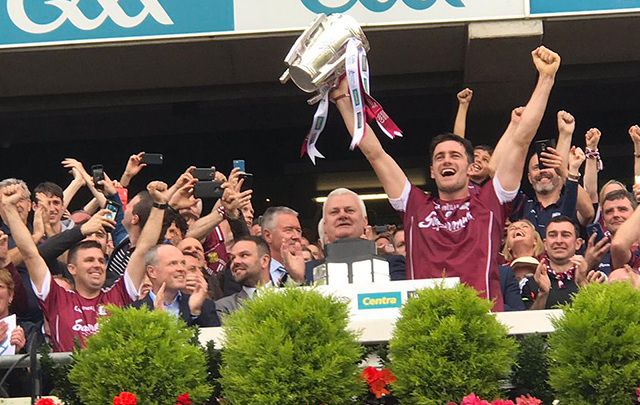 DUBLIN: Even on the way in to Croke Park last Sunday for the All-Ireland hurling final between Waterford and Galway, there was no escaping Donald Trump.

There was a fan in a Trump mask and a banner saying “Make Waterford Great Again.”

Like a lot of Trump slogans, the wish did not come to pass. They will have to wait a little longer.

Not since 1959 had Waterford won the most important prize in hurling.

Galway too were operating on hurt and trying to overcome a long famine.  They had had a 30-year wait. Joe Canning, one of the greatest players to ever play the game, was on perhaps his last chance to gain the ultimate prize, an All-Ireland medal.

The aristocrats of hurling, Kilkenny, Tipperary and Cork, were nowhere to be found at this final attended by 83,000 spectators.

This was a clash of the poor relations, the counties that usually returned home heartbroken and bereft but on this occasion, one would cross the Shannon heading for Galway Bay with the Liam McCarthy cup in hand.

I watched the game in the Gaelic Players Association box, the union that ensures that the all amateur players get taken care of in every possible way, other than payments.

CEO Dermot Earley told me the organization has gone from strength to strength as players themselves realize the value of their commitment and the GAA, the overall sporting body, has worked very effectively with them.

All-Ireland hurling day to me is the greatest date on the sporting calendar. Growing up in Tipperary it was hurling that was my first love, and it has stayed with me all my life.

You are watching a 2,000-year-old field game, mentioned in the earliest Irish annals, being played in the modern era. No game in the world can claim that.

I always find the playing of the Irish anthem at an All-Ireland hurling final deeply emotional. This Irish emigrant’s eyes brimmed with tears as the band struck up.

Then it was on to the game, played at breakneck pace, with an incredible atmosphere as the supporters for both sides shouted on their men.  All day long the tide of battle rolled, first Galway ahead, then Waterford, then level as the final moments ticked along.

Then a final burst of energy from Galway won them the prize, though in the last few breathless moments there were only a few points between them.

Fittingly it was Canning who had the last puck of the game, stroking a sideline ball when the referee called time.

The avalanche of maroon and white, the Galway colors, flooded the field.  The public address system struck up “Galway Girl,” the Mundy version. All hail the conquering heroes.

Soon the Liam MacCarthy Cup would be taken westward across the Shannon to a packed stadium in Galway where tens of thousands awaited.

The men of Waterford returned home losers, but mighty participants in a game of the ages between two teams who had never met at that stage of the championship.

As for me, I will return home to America touched by the mighty fire of Ireland’s greatest game and all it represents to the Irish spirit.  It cannot get better than that.

Read more: Young Irishman in the US to play GAA seriously injured after being hit by a car