Football player Aaron Elliott was found unconscious in Philadelphia where he had played with Kevin Barry’s GFC since March 2017. 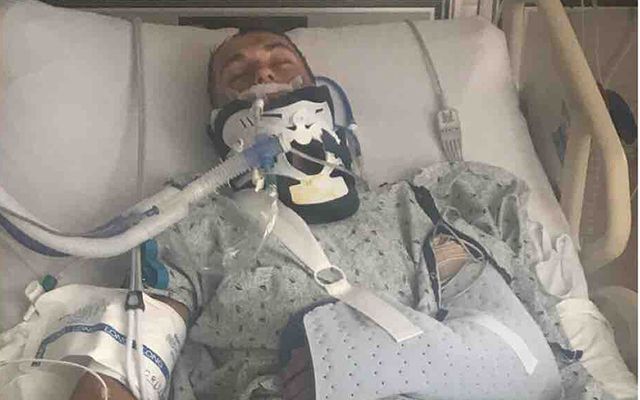 Tyrone football player Aaron Elliott was left with a leak on the brain, a blood clot, a fractured skull and a collapsed lung after a car accident in Philadelphia. Facebook

A 22-year-old Irish man was found unconscious with serious injuries in Jenkintown, Philadelphia, last weekend after being struck by a car. Aaron Elliott, from Co. Tyrone, has lived in the US since March 2017, moving from Ireland to play Gaelic football for Kevin Barry’s GFC. The young football player was left unresponsive and without a pulse, however, after a serious car accident that left him with a leak on the brain, a blood clot, a fractured skull and a collapsed lung.

Elliot is thankfully now conscious, and Kevin Barry’s GFC has started a fundraising campaign to cover Elliot’s rising medical costs which could reach as high as $100,000 without medical insurance.

Found on Saturday night, Elliott received CPR at the scene of the accident before paramedics rushed the Tyrone man to Abington Memorial Hospital for emergency surgery on a severe compound fracture to his elbow. Further reconstruction of his elbow is planned for tomorrow, Friday, September 1.

Although initially sedated, doctors have now woken the GAA player up to monitor his brain activity and reactions to instructions while his football club has flown his family to the US as he faces at least six weeks recovery time in the hospital.

Aaron Elliott, a football player from Coalisland, has become a popular member of the US GAA community since moving in March 2017

Once released, the 22-year-old will also require intense rehabilitation for which he has no health insurance to help cover the costs. In an effort to help the family confront their growing medical bills, the club has started a GoFundMe page hoping to raise $100,000 to cover the expenses, while the Philadelphia Irish Center is also organizing a fundraising auction for October 8.

The fundraising efforts have so far raised just short of $16,000.

Read more: Irish father fed bleach to his autistic son as a “treatment”

“Aaron is already on the road to recovery, but he still has a long way to go so look out for other opportunities to support Aaron with a fundraiser on October 8th in Philadelphia at the Irish Center,” the GoFundMe page states.

“Thank you in advance for your love and support!”

You can contribute to the fundraising campaign here.