How many in the US need to die in mass shootings before we do something?

Exactly how many people need to be murdered in a mass shooting for us to really, truly take notice? 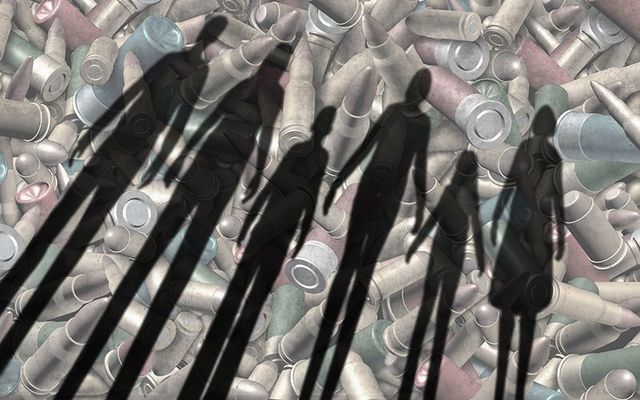 How many need to die in mass shootings in the United States before things change? Getty

Exactly how many people need to be murdered in a mass shooting for us to really, truly take notice?

It’s more than a dozen.  That’s how many innocents were gunned down last week at a bar in Thousand Oaks, California… remember?

The Pittsburgh synagogue massacre which preceded Thousand Oaks by less than two weeks gave us 11 new obituaries to think about…which we did, for a couple of days.

These are the victims of Thousand Oaks shooting.

And how can we forget the school shootings in Parkland, Florida in February (17 dead), and Santa Fe, Texas in May (10 dead).

1/ Texas is as gun-friendly a state as they come. But how do voters feel about gun control, according to recent polls?

More than half of Texans polled wanted stricter gun laws. And that was before the Santa Fe school shooting. https://t.co/ojrUkzNLBx pic.twitter.com/MKeEdjYCQ7

As it turns out, we Americans are really good at forgetting these senseless, utterly inhumane tragedies that are happening with frightening regularity.

But let’s give ourselves a little dollop of credit – we’ve mastered the art of offering our thoughts and prayers, very valuable weapons in the fight for sensible gun ownership laws.

Americans have become utterly desensitized to the carnage around us.  In 2018 alone we’ve had 312 mass shootings, according to www.gunviolencearchive.com -- that’s nearly a shooting per day.

Maybe if they all happened at the same time, in the same place, maybe then we’d be sufficiently outraged enough to demand action.

Then again, probably not.  We’re a nation, after all, that cried lots of fake tears after the slaughter of 20 little children and six teachers at their school in Newtown, Connecticut in 2012, but did little to press the politicians who represent us to do something about it.

I understand the #BorderlineBar mass shooting too, but "The soul is healed by being with children." - Fyodor Dostoevsky #Republicans did nothing about these #Newtown angels being killed. They should've been voted out long ago. Women we are depending on you. #ChildrenInCages pic.twitter.com/9EudiZnxmK

The Thousand Oaks atrocity has ushered in a new, only in America achievement: some of the survivors were also in attendance at the October 2017 Las Vegas concert massacre that snatched 58 helpless souls.

Can you imagine surviving not one but two mass shootings in your lifetime? The number of fortunate people who’ll be able to say that they did will likely expand as our political “leaders” continue to bury their heads in the sand.

How can we boast that our country is the land of the free and the home of the brave when you can’t even be sure you’ll escape with your life after a trip to the mall, or a night at the movies, or commuting to work on public transit?

We’re racking up all these horror shootings and as a nation, we’re barely even talking about what to do because of the news cycle whiplash.

You think Trump firing Sessions matters to the families of the Thousand Oaks victims?  The president is furiously cooking up a new election controversy in Florida – how come he wasn’t similarly outraged after the Parkland savagery?

Trump, ever the fantasist, is looking to wipe out the 14th Amendment to our Constitution, the right to automatic U.S. citizenship for those who are born here.  While he’s at it, he should take the Second Amendment and its right to bear arms, rip it to shreds and start anew.

Anyone who seriously thinks that the Founding Fathers would be satisfied with how the Second Amendment has played out in this country needs a mental health workup.  They would be appalled that the law has been used so cavalierly to cut short thousands upon thousands of lives, including many officers of the law who died while trying to prevent the killings.

Look at the face of Sergeant Ron Helus, a member of the Ventura County Sheriff’s Office who ran into the Thousands Oaks bar trying to stop the assassin. His bravery cost him his life.  You think the authors of the Second Amendment would be okay with that?

There will soon be another American city or town added to the list of places where senseless death was allowed to happen.  Don’t be too shocked if it’s where you live.

We’ll be sad and angry of course, but unable to do much about it because gun manufacturers like Glock need to reach their sales targets, and the omnipotent NRA needs fresh blood on its hands.

Well? How many people need to be murdered in a mass shooting for the United States to really, truly take notice? Let us know your views on gun control in the comments section below.