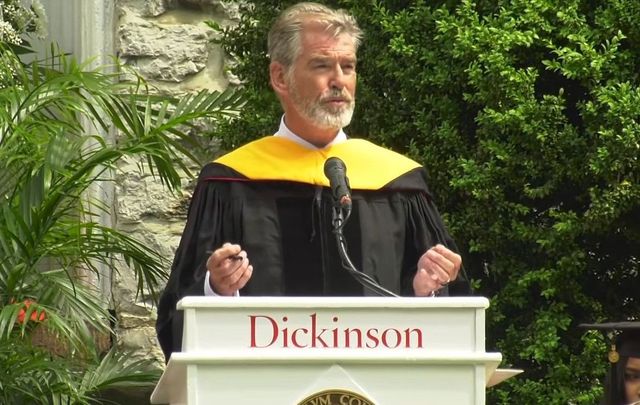 PB was awarded an honorary doctorate by Dickinson for his work on environmental issues.  The Co. Meath native has been a long-time activist with regards to saving whales and marine life.

His most famous role was, of course, James Bond – Pierce played the superspy in three installments of the franchise.  Dickinson grads, he said, can create their own versions of Bond.

“As someone who has saved the world a few times, or at least played someone who has,” advised Pierce, who turned 66 last week. “I’d like to offer you a bit of advice.  Our world doesn’t need a Bond. Our world doesn’t need a lone hero, out to solve things solo. We need people from different disciplines and walks of life who are willing to work together, who can rely on one another, who can push forward, united.”

PennLive.com reported that Pierce spoke for about 20 minutes to the 600 graduates, and proudly detailed his Irish background.  When he moved to England to be with his mother his new classmates were cruel, calling him by the name Irish instead of Pierce.

“I wore it as an emblem of pride,” he said, “trying to find my footing in this new landscape of prejudice and racism…I learned to assimilate. It was, in some ways, my first acting job, to be someone else.”

He urged the students to take climate change seriously and to work towards healing instead of harming the planet.

“James Bond could not take on climate change alone,” he said. “But scientists and activists, policymakers and business leaders, all working together, they could. They can. If we hope to heal our world, we’ll need to do it together.”

Read more: Sean Brosnan opens up about his battle with drugs