"Jesus himself... said, “Whatsoever you did to the least of my brothers, you did to me.”" 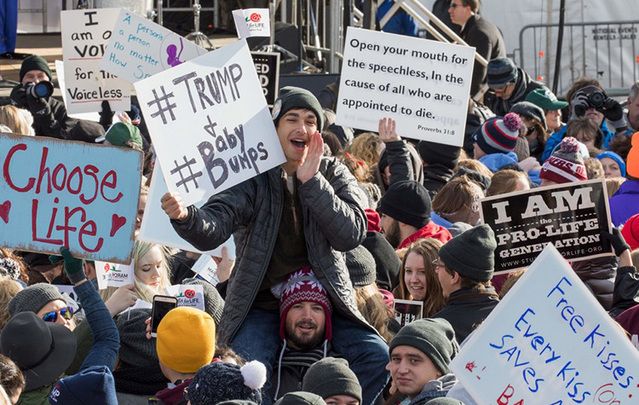 Attendees at the March for Life rally in Washington, D.C. last Friday.

Which side are you on?

So asks the old folk song, recorded by many an angry musical artist, from Pete Seeger to Irish punk rockers Dropkick Murphys.

Well, we know what “side” the rabid liberal who said the following is on, right?

“Closing borders and building walls are not rational acts.  Mass detentions and wholesale deportation benefit no one; such inhuman policies destroy families and communities.”

Just in case we weren’t sure, this fellow went on to cite the Irish as one of many groups “over the past 260 years whom we have welcomed and helped to find a better, safer life for themselves and their children in America.”

He added, “Even when such groups were met by irrational fear, prejudice and persecution, the signature benevolence of the United States of American eventually triumphed.”

Then the kicker, “That confident kindness is what has made, and will continue to make, America great.”

You see what this liberal is doing?  Rubbing Trump’s nose in it.

But maybe that’s part of the problem.

It’s easy for liberals to pretend that everyone is horrified.  But many people are quite fine with what Trump is doing.  He said he’d do this stuff and now he’s doing it.

At the very least, Trump supporters believe none of this stuff will personally affect them.  So go ahead and keep all those damn Muslims out of this country.  Go ahead and outlaw abortion.  Go and de-fund “sanctuary cities.”

It’s important that Trump critics acknowledge this.  Both sides, too often, seem to live in a bubble, talking only to like-minded people, content to merely have their own point of view affirmed.

Really fighting back is going to require more than this.

Consider the two marches that descended upon Washington these past days.  One was the March for Women, at which much progressive anger was unleashed.

Then there was the March for Life, dominated by conservative Catholics and other activists who are sensing that 40 years after Roe vs. Wade, the stars might finally be aligned to, once again, criminalize abortion.

It might seem as if these are the two sides we have today.  But these two sides are not completely oppositional.  In fact, they may need to march together from time to time.

Which brings us back to our aforementioned liberal friend voicing his anger at Trump’s anti-immigrant policies.

Actually, this was the city of Newark’s new archbishop Joseph Tobin, which should shock nobody, because the Catholic Church, for all of its problems, has always been a consistent voice for social justice.

You know why?  Because that’s what Christians are supposed to do.

As Tobin noted, Moses said in the book of Exodus: “You shall not oppress an alien; you well know how it feels to be an alien, since you were once aliens yourselves.”

This is a passage that resonates not only with Tobin the Catholic but Tobin the Irishman, who noted that he is “the grandson of immigrants.”

Jesus himself, Tobin noted, said, “Whatsoever you did to the least of my brothers, you did to me.”

He added, “Threatening the so-called ‘sanctuary cities’ with the withdrawal of federal funding for vital services such as health care, education and transportation will not reduce immigration.  It only will harm all good people in those communities.”

This all sounds so good.  But here’s the problem for many Trump critics: someone like Tobin was at the wrong march last week!

Someone like him would have been at the March for Life because the Catholic Church has also adamantly and consistently opposed a woman’s right to choose.

Well, that is true.  Liberals are free to sneer at Catholics because of abortion, but all they are doing is alienating one of the most generous and socially progressive organizations in this country.

As for Trump’s supporters, they are so concerned about keeping Christ in Christmas that they are forgetting to keep him in their own lives.

If we’re going to talk about building bridges rather than walls, that may mean, at times, looking the other way on some issues so as to make progress on others.