No space for complacency as lockdown grips Dublin again

As infection numbers in Dublin rise with the city center already a ghost town, Ireland must hold firm to flatten the curve again, although it's tough going. 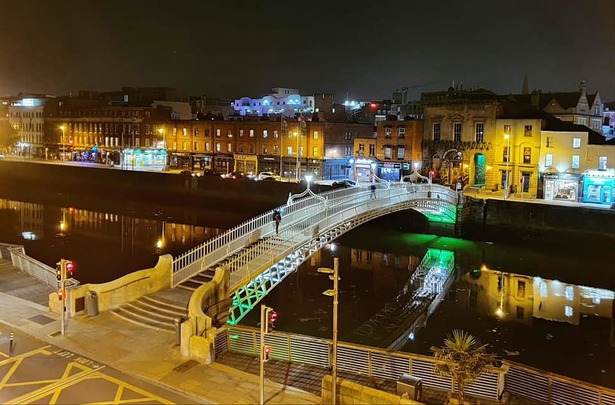 The picture on this page of the famous Ha'penny Bridge in Dublin was taken from the roof terrace of The Woollen Mills restaurant at 9 p.m. last Thursday. It's a beautiful nighttime shot -- but it's also a sad reflection of what Dublin is like these days.

The pedestrian Ha'penny Bridge would usually be crowded at 9 p.m. on a Thursday night with people crossing over the river heading for the pubs and restaurants in Temple Bar.  The streets and sidewalks on either side of the Liffey would usually be jammed with cars and people out for the night, both locals and tourists.

Yet as you can see from the picture this area in the very heart of the city center is deserted.  The lights are on, but there's no one there.

Bear in mind that the picture was taken last Thursday.  That was the day before the government introduced tight new restrictions to combat the alarming rise of COVID infections in Dublin.

If it was like that before the new Level Three lockdown in Dublin, you can be sure the city is now back to being a ghost town again, especially in the evenings.

What prompted the new lockdown, effective from midnight last Friday, is the speed at which new infections are appearing in the capital.  Just a few weeks ago cases were down to around 30 or 40 on the best days, spread across the country.

In the last week or so this has soared to 300 or 400 cases a day, with more than half of them in the capital.  On Sunday evening the figure for the last 24-hour period was 396 new cases, of which 241 were in Dublin. Case numbers are doubling every week.

The fear is that if this acceleration continues then the hospitals in Dublin will not be able to cope in a month or two from now and we will be facing a major crisis.  So on the advice of the expert health committee, the government has intervened strongly.  No one likes it, but most people agree it's necessary.

Last week was about as bad as it could get for the new government.  In the middle of the week, it announced the introduction of the new five-level framework for living with the virus, from Risk Level One with minimal restrictions to Risk Level Five with total lockdown.

But on the very day they were trying to communicate the details of this complicated message to the public, Health Minister Stephen Donnelly became ill and had to go for testing.   Since he had been at Cabinet meetings, the government was unable to meet for several hours and the Dail had to be suspended until, eventually, he was found to be negative. 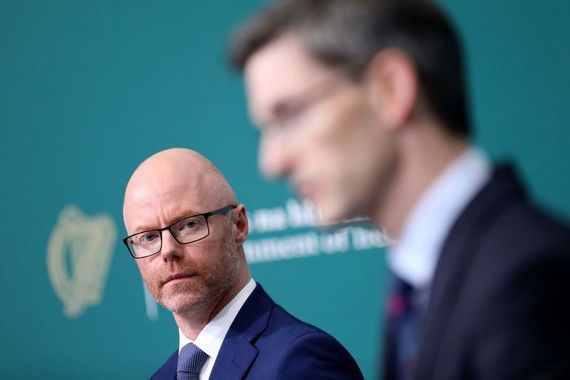 This introduced almost an element of farce into what was a very serious matter for the government and the country.  Taoiseach Micheal Martin's reputation as an unlucky general and the new government's reputation for floundering and dithering were made even worse if that is possible.

Despite this, the message did get across and a chart detailing the restrictions at each risk level appeared across the print media, on TV, and online.  Just a day or two later (on Friday) the government announced that the situation in Dublin had become so worrying it was necessary to put the city and county on Risk Level Three for at least three weeks, with some extra precautions added.

The restrictions under Level Three include:

*Wet pubs (the ones that do not provide food) cannot reopen as promised this week and the pubs that do serve food, as well as cafes and restaurants, can only do so at outdoor seating or as takeaway.  For many of them, this is unviable.

*The number of visitors in private homes is a maximum of six people and they must be from a single household.  All indoor social gatherings are forbidden and outdoor events cannot have more than 15 people. *Weddings and funerals can take place but must be limited to 25 people.

*Public transport only to be used for essential reasons, walk or cycle instead and work from home if possible.

There is much more in the Level Three regime, the detail of which is available on the government website, gov.ie/dublin.  The net effect overall will be to crush the recent fragile reopening of the economy in the city, with the hospitality sector very badly hit.

Hotels and guesthouses can remain open, but their facilities (bars and restaurants) can only be used by residents.  There are estimates that the overall effect of the Level Three restrictions in the city (combined with the already drastic fall in tourist numbers) will cost around 100,000 jobs in the hospitality sector.

For example, the owner of The Woollen Mills restaurant (who took our picture of the deserted Ha'penny Bridge) says that he will now have to let most of his staff go, and many other owners of bars, cafes, and restaurants in the city will be doing the same.  They say the uncertainty that this three-week shutdown may be extended -- or that we could get to a Level Five total lockdown for weeks or even months -- makes it impossible for them to continue as before.

The no-warning imposition of the restrictions has also hurt.  On Dublin's Northside last weekend, for example, Sustainable Seafood Ireland which supplies many hotels and restaurants in the city had a market sale in a public park to get rid of stock.

Having said all that, it is important to state that the prevalence of the disease here is still relatively low.  At the end of last week, the figure for the 14-day incidence of the disease per 100,000 of the population was 300 in Spain, 185 in France (the two worst countries in Europe), over 100 in Belgium, Holland, and Austria, 69 in the U.K., and 61 in Ireland.

But there is no room for complacency because the rate of growth here has shot up, just as it has in the U.K. and several other European countries where a second wave of the disease is now well underway.   In the U.K. there is talk of a very severe lockdown in London to add to the restrictions already in place across large parts of Britain.

Like elsewhere in Europe, the number of COVID related deaths here is way down, just a fraction of what it was when we were in the first wave a few months ago, and care homes for old folk were badly hit.  The theory, supported by the data for recent cases, is that many more younger people are now getting the disease and do not get as sick -- indeed the suspicion is that a lot of younger people who get it are not even aware they have COVID.

That sounds like good news, but the health experts here say that if the recent acceleration in cases continues the disease will inevitably spread into old and vulnerable people and the number of deaths will climb rapidly again.  In fact, we are already starting to see this trend emerge -- COVID cases in the over-65s were zero in the first week in July but have increased every week since then, and last week there were 163 cases.

Even more than in other countries in Western Europe, we cannot afford to let this happen. The reason is that we have far fewer ICU beds in hospitals here and a health system that finds it hard to cope even in normal times.   If we hit a crisis here we will lose a much higher percentage of older patients than happens elsewhere.

Not everyone here is on message.  The weekend before last there was a demonstration in the city center with a few hundred people protesting against mask-wearing, social distancing, and restrictions and claiming that the whole COVID thing is a hoax, a plot to undermine personal freedom.

So it's not just in Trump's America you have the crazies.  We have them here as well, many more than you might think.