Does abortion referendum mean the death of Catholic Ireland?

Does Ireland's abortion referendum represent the death of Catholic Ireland? 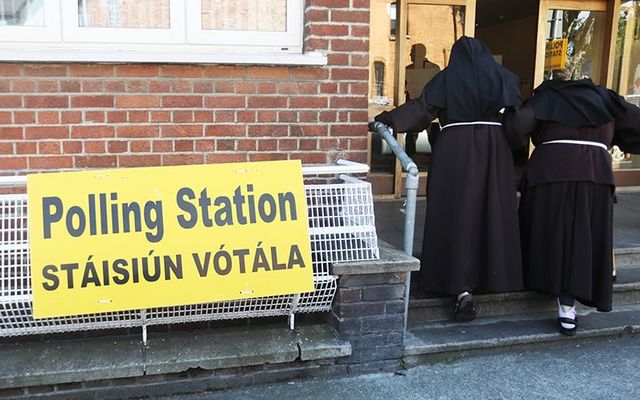 Nuns at a polling station in Ireland RollingNews

As the country calmed down again last week after the euphoria of the abortion referendum result, there was a lot of analysis of what had just happened and who deserved the credit.

We will come to those claiming the credit later. But first the analysis and the fact that much of it seemed to reach the same conclusion -- that this marked the death of holy Catholic Ireland.

More than anything else, it was claimed, the overwhelming vote to allow the introduction of abortion here was undeniable proof that the Catholic Church in Ireland had finally died. It made a neat headline – “The Death of Catholic Ireland.”

But appealing though that conclusion was too many, it's a bit simplistic.

The reality is that the Catholic Church here has been dying a slow death for the last 20 years at least and the abortion vote was another milestone on that journey of terminal decline.

Whether it amounts to the final death rattle remains to be seen.  It ain't dead yet.

Certainly, it is clear after this vote that the power and influence of the church have gone, eaten away by the never-ending scandals.  Even worse, it has become largely irrelevant, ignored by many of those who are still practicing Catholics.

In the run-up to the referendum, the bishops had once again pronounced on what they expected the faithful to do in letters read out by priests at Masses.   In days gone by a bishop's letter was listened to by the congregation as if it were the Sermon from the Mount.   Such letters, often lengthy and complex treatises on moral issues, were accepted almost as holy writ.

This time one wonders why their Lordships bothered.   The reality now is that their letters make little difference.

The dwindling faithful may listen politely, but then they go off and make up their own minds.   And that is part of what led to the resounding win for the yes side in the abortion referendum.

Of course, it was not just that so many practicing Catholics appear to have voted yes (there is no longer enough of them to produce such a dramatic result).   It was that the wider silent majority of middle Ireland who, whatever their misgivings about abortion, decided it was time for a change.

It was all those people -- the ones who still call themselves Catholic but only see the inside of a church at Christmas and for births, marriages and funerals -- who made up their own minds and voted yes.

For them, this was about kindness and fairness and giving women the right to make their own decisions in difficult circumstances.  It was about accepting reality, not judging, and having the confidence to make a mature decision themselves rather than being told what to think by someone in a clerical collar.

This does not necessarily mean the death of the Catholic Church.  After all, where does that impetus to be kind and caring come from if not from the Catholic values and traditions that most people in Ireland grew up with?

The church may never again be the controlling force it once was.  But it can still save itself if it introduces married clergy and women priests to finally end its warped image on sexual matters. And if it genuinely becomes a church of the people who will themselves decide what the message of Christ means in the modern world.

Unfortunately, there was little sign of that last week, with several of the bishops moaning about the result and at least one suggesting that yes voters needed to go to Confession!   Someone needs to tell them that when you're in a hole you stop digging.

Meanwhile, some of the faithful who were interviewed said they felt no contradiction between voting yes and going to Mass on Sunday.  For them, it was simply about doing the right thing.

Apart from the woes of the Catholic Church, much coverage was also given last week to those who were supposed to have produced the phenomenal result.  There was a great deal of jubilation and self-congratulation among the leaders of the coalition of groups who campaigned for a yes vote.

They deserved their moment in the sun, of course.   But their influence on the outcome was exaggerated.

Their influence was mainly in the female 20-35 age group, the kind of young women who filled the square in Dublin Castle to celebrate the result.  But they were always going to vote yes.

The extraordinary scale of the yes vote came not from them but from middle Ireland, the people who listened to all sides and then quietly made up their own minds.  It's most unlikely that many of them were influenced by the more strident voices in the Coalition for Yes campaign or on the other side of the debate.

The truth is that the wrong people were claiming all the credit last week and congratulating themselves.  The bulk of the credit should be going to the plain people of Ireland who ignored much of the cacophony as the campaign intensified, who kept their views private, and who then turned out to vote in such large numbers and did what they thought was the right thing.

Among the politicians, there were a few dubious credit claimers as well.   Taoiseach Leo Varadkar had been lukewarm and hesitant in his campaigning for a yes vote, yet there he was on the stage at Dublin Castle basking in the glory when the national result was announced.   To be fair, he carried through on his promise to hold the referendum, but he was far from fired up on the campaign.

And then there was Mary Lou McDonald, the new Sinn Féin leader who has been everywhere on TV and in the papers celebrating the victory. She did campaign vigorously for the yes side, but the use of her picture on Sinn Fein posters which went up all over the country was self-serving.

It smacked of virtue signaling as well as being a convenient way of getting her face before the public in advance of an election that may now be less than a year away.   The other party leaders could have used their pictures on their posters but they didn't, concentrating instead on the issue.

The one politician who did deserve a lot of credit for the result was virtually ignored last week in the euphoria.   The Fianna Fail leader Micheal Martin declared early for the yes side despite at least half of his parliamentary party subsequently saying they would vote no. He faced them down and then went out and became probably the most articulate and convincing campaigner, particularly as an influence on the silent majority of middle Ireland.

In the midst of all this celebration last week (as if things could not get any worse for them), there was the re-emergence of yet another scandal involving the Catholic Church and Catholic religious orders and organizations involved in adoption.  It was, as one columnist here put it, yet another dark chapter in Ireland's never-ending story of shame.

The Minister for Children Katherine Zappone held a press conference last week to reveal that it had been discovered that 126 people who were adopted as babies decades ago through the St. Patrick’s Guild adoption society in Dublin had been registered incorrectly on their birth records.  Such false birth registrations happened when a baby was placed with a couple who were not its parents, but the birth was then registered as if the child had been born to them.  So unless the adoptive parents told the child the truth, later on, the child would never know that they were not their biological parents.

The reality is that although this particular cohort of cases was new, the story that this went on at the time (mainly back in the 1940s to the 1970s) was not new.  In fact, books have been written about it (one of the best is Banished Babies: The Secret History of Ireland's Baby Export Business by the RTE reporter Mike Milotte which was published 20 years ago).

It happened on an industrial scale and thousands of babies were taken from their young unmarried mothers and sold into adoption by Catholic organizations, with many going to the U.S.

There is much more to come on this story since the old proprieties that kept this shameful and cruel business under wraps here for so long have been swept away by the change of mood in the new Ireland that is now emerging, as we have seen in the abortion referendum.  There is a new determination now that the full truth will be told, no matter how unpleasant or difficult it is to uncover.

The heartbreaking story of forced adoption will be next in our national litany of horror stories.