Last year’s St. Patrick’s Day march up Fifth Avenue was an unforgettable occasion in the life of a young Irish American from Brooklyn. 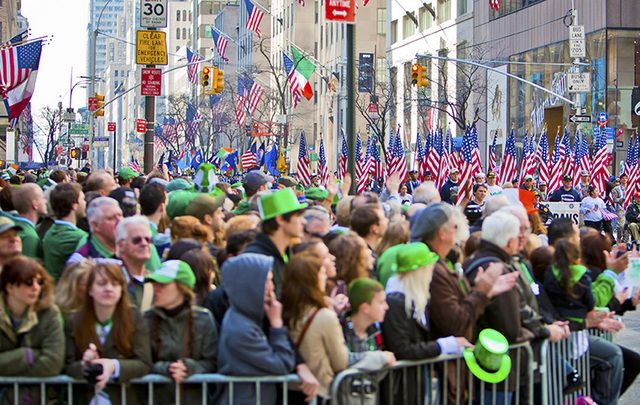 The receipt of a special parade sash during last year’s St. Patrick’s Day march up Fifth Avenue was an unforgettable occasion in the life of a young Irish American from Brooklyn last year who plans to wear it proudly during the 2017 parade next month.

Dennis Doherty, 20, received the sash from a parade official after he and his mother Katherine had difficulty crossing Fifth Avenue because of Doherty’s mild cerebral palsy.

According to a press release from the parade, Dr. Patrick J. Delamere, chairman of the parade’s Line of March Committee, came to the Dohertys’ assistance and gave them his sash which allowed for easy crossing.

“It hangs up on my wall now. It makes me so happy,” said Doherty, of Marine Park.

“I can’t wait to go to the parade again this year. I love watching the counties march, especially Donegal!”

When looking back on past parades, the Doherty family has fond memories.

“We have been going to the parade for a long time. I marched for many years, and now my nephew, Patrick participates,” Katherine said.

Katherine participated in the parade through the Telephone & Communications Emerald Society, and Patrick Doherty currently marches with the Department of Sanitation Emerald Society.

Katherine is a devoted member of the Ancient Order of Hibernians, and her son plans to become a member this year.

“I’m excited to join the AOH. I want to learn more about the history and I love a good Irish song,” he said.

Last year, the Dohertys took their first family trip to Ireland together.

“We stayed in Donegal at my mom’s old home, where a lot of my family still lives. When we go back this year, we are going to explore the other cities too,” Katherine said.