"Bad hombres"? How about pedophiles and the people who protect them?

You want to talk about “bad dudes” and “bad hombres”? Cardinal Burke, Steve Bannon and the rest. 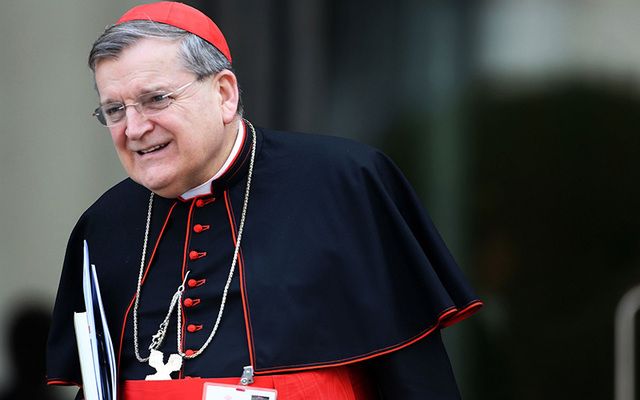 You want to talk about “bad dudes” and “bad hombres”?

How about pedophiles and the people who protect them?

In recent weeks, interesting stories about President Trump’s right-hand Irish Catholic man Steve Bannon have been trickling out.  Among the revelations: he’s got kind of a man-crush on fellow Irish Catholic and former St. Louis Archbishop Raymond Burke.

Burke ended up on Pope Francis’ bad side -- more on that later -- and was booted upstairs to a job at the Vatican.  For a while, Burke seemed a raging relic.

At a time when Pope Francis was talking about opening doors, not judging people and protecting the weak -- you know, all those crazy things Jesus spoke of -- Burke represented the opposition.  He proudly wanted to go backward, not forward.

Make the Vatican great again, if you will.

In the end, Burke was out in the cold.  But Trump’s election -- and Bannon’s budding alliance with Burke -- has made him an influential figure again.  This should enrage the millions of Irish Americans and other Catholics who voted for Trump.

Rewind to October 2010.  Millions -- faithful as well as lapsed Catholics -- were still absorbing the sex abuse revelations. That’s when Burke was promoted to cardinal by Pope Benedict.

Burke was not merely a darling of church conservatives.  He was also identified by advocates -- many within the church itself -- as dangerously lax when it came to protecting abuse victims and investigating allegedly abusive priests.

“We're saddened by (Pope Benedict’s) pattern of promoting bishops who ignore or conceal child sex crimes. While in St. Louis, Burke was often reckless, deceptive and callous regarding predator priests, vulnerable kids and wounded victims,” said David Clohessy, at the time the director of  the Survivors Network of those Abused by Priests (SNAP).

Clohessy added, “(Burke) expanded the troubling practice of importing sexually troubled priests from across the U.S., letting some of them work in local parishes and letting others stay in church facilities that are secretive and careless about public safety. (Pope Benedict) continues to reward men just like him: bright but rigid, and seemingly more committed to preserving orthodoxy than protecting children. The Pope can't have it both ways.”

Burke’s policies of investigating abuse allegations had even come under fire by a group of priests, nuns and others in the church -- known as The Whistleblowers -- who had dedicated themselves to protecting victims and investigating all charges fully.

Father James Connell, a key figure in The Whistleblowers, once said, “I find the naming of Archbishop Raymond L. Burke to the College of Cardinals to be most unfortunate and disconcerting. Actually, I find this promotion to be an affront to survivors of clergy sexual abuse, their families, the Catholic Church, and society as a whole.

“Cardinal-designate Burke has demonstrated his disregard for provisions … established by the Catholic Bishops of the United States in 2002 to better protect the children and young people of the church.”

This is Trump’s man at the Vatican? This is what millions of Catholic Americans voted for?

For weeks I’ve been mystified as I watched HBO’s new show The Young Pope.  The show is dreamy, which is another way to say that sometimes it’s completely non-sensical.

Also, a show about a “rad trad” -- radical traditionalist -- who gleefully wants to return the church to medieval times seemed way out of step in the Francis era.

But with Trump targeting (only certain) “bad dudes,” and with Bannon and Burke swapping ideas, The Young Pope is starting to make a little more sense.