Nightmares can be fearful experiences altogether as all of us know. This bitter reality was hallmarked for me on an early August night here in Clare. 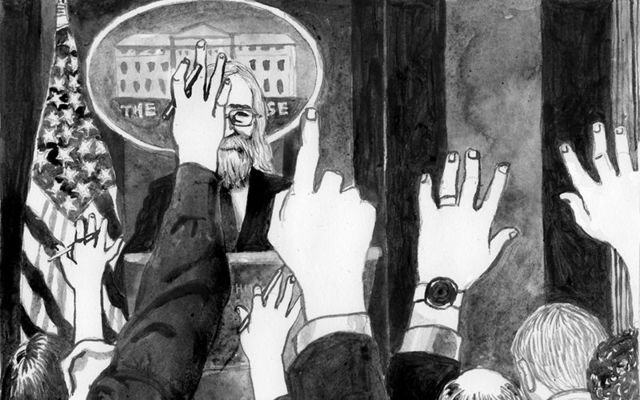 Nightmares can be fearful experiences altogether as all of us know. This bitter reality was hallmarked for me on an early August night here in Clare.

The cold sweat of the experience is still on my furrowed brow as I write this with trembling fingers. I have to recall this horror for ye in the kind of detail that, I fear, has been seared across my brain forever.

I went to bed as happy as Larry you see, tired after a long day, and drifted gently away from this hard world. But, dammit, within what seemed like minutes I was wearing a green suit and a red tie and standing high above the press rabble in the White House as the replacement spokesman for Sarah Huckabee Sanders who had been sacked from her position hours earlier that day, joining the long list of those discharged by your esteemed President Trump.

The horrific element of the nightmare for me was that, despite retaining my previous critical view of the actions of your most powerful man, right from the first question from the floor I defended resolutely everything that has dramatically unfolded for America and the world since President Trump came to power. I knew I was doing this to retain my big new job with all its prestige.

Deep inside I was extremely ashamed of myself at the way I was behaving but betrayed no physical evidence of that at all. God forgive me but I even refused to accept questions from several prominent journalists I knew to have been blacklisted as purveyors of what I several times sneeringly referred to as fake news.

Several of these decent hacks were from the CNN channel which ye know more about than I do.  I gave them no quarter at all right from the beginning of the press conference, and did that so convincingly that I even got a clap on the back from the boss when the conference ended.

I got many phone calls from journalists later in the day and, in my nightmare mode, dealt easily with them all. At the back of my mind all the time I was remembering growing up in Ulster alongside a merry young man nicknamed The Spinner because of his capacity to spin all kinds of yarns that were not true. I swear that his ghost took me over during this awful night because I spun more tall stories than the original Spinner did in his entire lifetime.

Concurrently my sleeping brow was beaded with cold sweat because of my awareness of my dreadful deceit and treachery.  It was an awful experience altogether and another negative facet of it was that, were the situation to arise in real life’s events (for sure that won’t happen!) there is the possibility I would not behave much differently in order to protect my big new powerful position with all the perks and prestige attached. Even in the pit of a nightmare, maybe one learns more about one’s hidden self.

It was beyond doubt the most horrific nightmare of the three or four I’ve suffered in my long life. Normally I enjoy a long and untroubled five or six hour slumber and wake up refreshed and happy.

Suffice it to say that when I eventually awoke up from this horror I was delighted to discover slowly that I had not really been drafted in to fill the shoes of Sarah Huckabee Sanders, that I had not indeed been on the White House press podium and, above all, that I had not been spinning dozens and dozens of fake stories just to hang on to my new job.

Never in my life have I been so relieved to slowly realize that yes, indeed, it was all only a bad dream. It still probably chopped about four or five years off the rest of my lifespan, but even that is preferable to my disgraceful nightmare behavior.

As I said above, I have still not recovered and the old fingers are trembling, but I am a much happier hack than the terrible bastard that wore a green suit and a red tie on that ghostly podium in the White House.

There is a festival currently in full swing in the nearby village of Feakle. I think I will head over there for a few hours craic.

On the way I will remember it was the village’s most internationally famed daughter, the writer Edna O’Brien, who popularized the phrase that August can be a wicked month in many of its events. After my experience I’ll drink to that for sure!

Read more: Top tips from a local for your vacation in rural Ireland