All is well thanks to the GAA

Cead Mile Failte! Welcome to a happily exhausted space after the big GAA weekend all round the provinces and beyond that into your faraway Irish and Irish American homes as well. 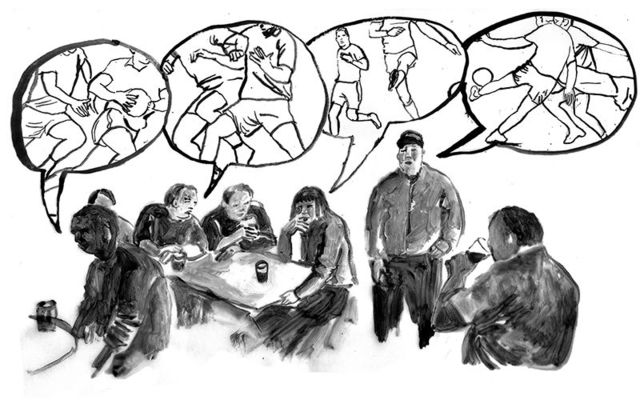 "The big ritual GAA battles in all the provinces are a real salve for our Celtic spirits." Caty Bartholomew

Cead Mile Failte! Welcome to a happily exhausted space after the big GAA weekend all round the provinces and beyond that into your faraway Irish and Irish American homes as well.

Welcome aboard all of you during summer days and nights when the big GAA provincial clashes drive away altogether from our minds and souls all the concerns and worries related to mere economic and social and political issues. I suggested here some time ago that the big ritual GAA battles in all the provinces are a real salve for our Celtic spirits and, thankfully, that is very much a modern reality this June.

There have been no sporting surprises, really, during the  provincial finals fought out over the Four Green Fields thus far, but the truly beautiful mindset created by the amateur GAA games totally diverted our minds here at home, and probably with yours too, wherever you now reside, from issues such as the Brexit problems in the Disunited Kingdom across the Irish Sea.

So what if there may be problems associated with the Irish border. So what if the British politicians in Westminster are in total disarray and chaos on every front.

The exploding talking points everywhere along this side of the Wild Atlantic Way have been the continuing football dominance on their hallowed turf of Kerry away down south, canny Donegal in Ulster against Cavan, Roscommon’s triumph in the west, and Dublin’s continuing triumphs in Leinster.

Nobody is talking at all anywhere I have wandered about in Tipperary and Clare so far this June about anything other than the developments in the GAA sporting world that matters to so many of us so much now and always.  That warms the cockles of my heart and probably yours too if I know ye at all by now.

The remarkable reality at present is that all the debate around me in Walsh’s great pub in the heart of Killaloe is about sporting developments, mainly GAA developments after the provincial finals and their consequences for the rest of the summer. Nobody is speaking about your noble leader Trump or his lookalike in Westminster Boris Johnson.  If either of them made a major political announcement earlier in the evening, in relation to great deals, border issues worldwide, or declarations of war if necessary, it did not matter at all in the debate about Cork’s football battle against Kerry, traffic arrangements for golf’s Irish Open in Lahinch by the sea, and Donegal’s clear triumph in the Ulster final in Clones against Cavan. Remarkable but true, and that is heartwarming.

When I was a boy growing up in Fermanagh in the fifties of the departed century, my father Sandy would bring me always to the Ulster football final in Clones on what we called the Free State side of the hard border of that era. Looking back now, I know that was as much a statement of nationalist identity from a minority community in Fermanagh as it was the enjoyment of a special sporting event.

We would be well checked out by the customs staff manning the (hard) border posts for both Stormont and what we called simply The State, and then the excitement of the big final in the natural amphitheater of the GAA ground in Clones.

I will never forget those trips with a good father keeping me safe all the way there and back home again in the evening. Special memories indeed even though our native county Fermanagh was never involved in those years.

Often the games of that era featured Tyrone, Armagh and, later, the men from the mountains of Mourne led by stars like Lennon and Mussen and Morgan. I’ll never forget those stars of that era, wearing the first black shorts seen on the field of play and creating a new flashing style of Gaelic football altogether.

One section of my expanded family circle is still celebrating Donegal’s triumph, another wing of the clan is delighted that Dublin have underlined their class and style against Meath in their decider inside the Pale, and the next round of the new round-robin structures for the championships are throwing up all manner of possibilities that did not exist in the KO systems which applied back when Sandy brought me to Clones as a boy.

Who cares these days of summer about essentially mind-numbing issues like Brexit and trade wars and tariffs and even the threat of more wars in the Middle East? Nobody is talking about such mundane matters at a time when Mayo’s footballers, despite all their bravado, are again not fancied to create history in Croke Park come what ye call the fall over there.

We will leave it there for now maybe. The triumphant flank of my expanded family from Donegal is arriving at the doorstep any minute to take me out for a celebratory party up the town. Slan for the moment!

Read more: Having a gay auld time - how times have changed for the better