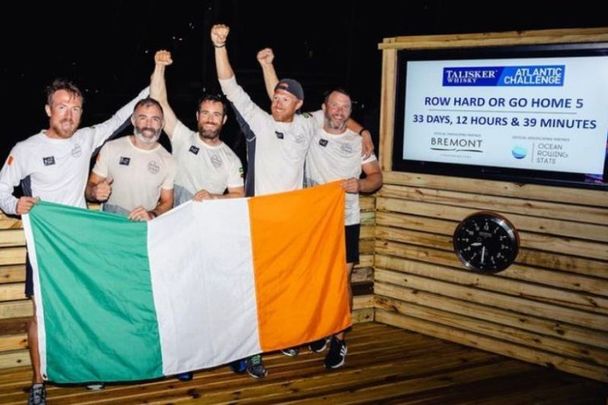 A team of five Irish rowers has set a new world record for the fastest crossing of the Atlantic Ocean as part of the Talisker Whisky Atlantic Rowing Challenge.

Rowing aboard the Brugha, the Irish team was taking part in the Talisker Whisky Atlantic Rowing Challenge, which began on the Spanish island of La Gomera on December 12.

The team crossed the finish line in Antigua at 8:30 pm local time on Sunday, January 15, breaking the previous record which was set by the "Ocean 5" team in 2020 by more than two days.

"Row Hard or Go Home 5" finished in first place out of the five-person teams, fourth place in the men's class, and fifth place overall.

They have set a New World Record for the Fastest Team of Five to ever cross the Atlantic Ocean! 💥 pic.twitter.com/b8RXw7fQhl

The Irish team's approach to the finish line was streamed online, which featured fans cheering and waving Irish flags. The Irish rowers sang "The Wild Rover" as they docked in Antigua.

"We hadn't planned on singing when we arrived but three was just huge energy and that's what came out," Ó Briain told RTÉ News, who noted that the team took to singing in the journey's "darker" moments.

Speaking after the race, Diarmuid Ó Briain said he was "so proud to be involved with four amazing individuals."

"I wouldn't row an ocean with anybody else," he said while standing on the podium after the race.

Teammate Gearoid Ó Briain told RTE News that apart from Shane Culleton, who had done "some coastal rowing," the rest of the team had "never rowed before."

"That was a big challenge because the teams ahead of us were a mix of professional rowers and endurance athletes," Gearoid Ó Briain said.

Ó Briain revealed that their relative inexperience was not their biggest challenge on the 33-day voyage, stating that their boat's solar panels, which gather most of the boat's energy, failed on the third day of the competition, leaving the team without navigation, communications, and water generation.

Teammate Derek McMullen, who services CT scanners and MRI machines for a living, had to rewire the boat to fix the solar panels.

"It involves moving electronics, drilling holes and all the while there was still three people rowing, and one person pumping water to keep us going," Ó Briain told RTÉ News.

"It took about three days to get us back up to full systems on the boat and we never fully recovered in terms of our ability to generate power, but we had enough to keep going."

The two Row Hard or Go Home teams are raising money for the RNLI and the Laura Lynn Children's Hospice.

Gearoid Ó Briain told RTÉ that all public donations will go directly to the charities because their sponsors had covered the cost of the race.

Meanwhile, solo Irish rower Jamie Carr, who is rowing under the name "Nothing Ventured," was second place amongst the solo rowers and had about 885 nautical miles left in his journey as of January 17.