Ireland refuses to grant passport to baby with two mothers

Co. Meath woman Katie Gallagher’s own fertilized egg was used as part of the IVF process but Ireland’s laws prevent her from being named as mother. 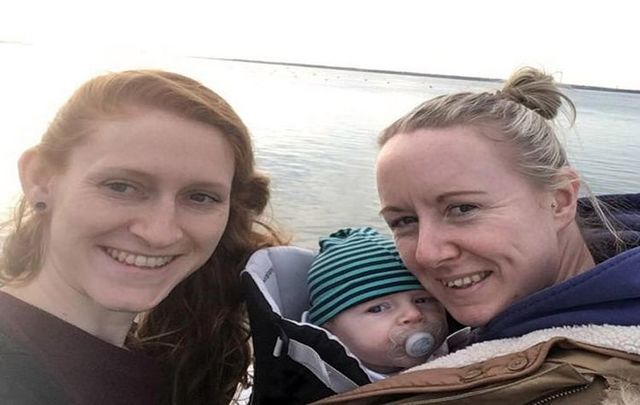 Katie Gallagher, right, is not recognized as Griffin's mother by the Irish government and so can not acquire a passport for her son.

Newly-wed couple Katie Gallagher and Holly Groombridge have voiced their recent dismay that Irish laws will not allow them to acquire an Irish passport for their 11-week-old son Griffin, despite Irish-born Gallagher having provided her fertilized egg to be implanted in her wife’s womb as part of the IVF process.

Born in Co. Donegal and raised in Co. Meath, 34-year-old Gallagher currently lives in Suffolk, England, with her English wife Groombridge, 31, but the couple had hoped they would be able to apply for an Irish passport for Griffin because of Gallagher’s own nationality.

The couple was dismayed to find, however, that under an Irish law from the 1950s, Gallagher is neither recognized as the mother or father of their child and so her own citizenship cannot be used by her son.

With Groombridge having given birth to Griffin last August, she is automatically named as the mother in the Irish application, leaving Gallagher with the title of parent, a title not recognized by the Irish government in terms of citizenship, seeing no alternative titles to mother and father.

Read more: What you should know about applying for Irish citizenship

Katie Gallagher with her son Griffin.

While recognizing that Gallagher is an Irish citizen, the Irish Passport Office replied to young Griffin's application stating: "However, for the purposes of Irish law and in particular in this case, for the purposes of the 1956 Act, a parent is understood to mean either the 'mother' or 'father' of the child.

Young Griffin will now be forced to look for a UK passport only, where same-sex parents and surrogacy births are recognized.

"We are just so frustrated and heartbroken that we can't get an Irish passport for our son because of an antiquated law passed in 1956," Gallagher told The Meath Chronicle.

"I proposed to Holly while backpacking in Australia three years ago and when we returned to London, we knew that it was the right time to start a family.

"We searched for a donor that bared a family resemblance to Holly in the hope that our baby would have similar attributes.  Amazingly, Griffin was born with ginger hair like Holly.

"After two failed IVF attempts, my embryo was successfully implanted in Holly and when we got the positive pregnancy test, we were over the moon,” she continued.

"Griffin is biologically my child but Holly carried and nurtured him for nine months and formed a strong maternal bond with him.

"From day one, we wanted to create a family together and this way, we had an equal connection with our child.

"But in law, there can only be one mother and that title automatically goes to the woman who gives birth.”

Well done Katie, great interview! How ridiculous is it that our laws mean Katie will need to adopt her own son to get an Irish passport?! https://t.co/1JzXaV4SJo

The Irish government confirmed that under Irish law, only the woman who gave birth is considered in this case

“Entitlement to citizenship is governed by Irish law and in particular the Irish Nationality and Citizenship Act, 1956, as amended.   Queries relating to the 1956 Act or its interpretation are a matter for the Department of Justice and Equality, which holds responsibility for citizenship legislation.

“Under Irish law, the mother of a child is the woman who gives birth to the child. This principle was confirmed in 2014 by the Supreme Court and it applies even if the child has been conceived using a donated egg.

“Parts 2 and 3 of the Children and Family Relationships Act 2015 provide for parentage through donor-assisted reproduction. These Parts are to be commenced, in due course, by the Minister for Health. The Act makes provision for parentage to be assigned retrospectively, through a court-based procedure, to the second member of a couple who have a donor-conceived child, but only where certain conditions are fulfilled. Where the conditions are not fulfilled, parentage will be assigned under current law, which means that only the woman who gives birth and the biological father may be included on the birth certificate. The position is the same for both heterosexual and same-sex couples.”

Despite the fact that same-sex marriage has been legally recognized in Ireland since 2015, other laws surrounding the family have not been updated to reflect this, leaving the children of some same-sex couples falling into gaps in the system such as this one. The Irish 1956 law does not just affect same-sex couples, however, as in cases of a surrogate being used by a heterosexual couple, the woman who gives birth is named as the mother even in the case of a donated egg.

Does Ireland need to update its laws to reflect the growing numbers of different family units and structures in the country? Let us know your thoughts in the comments section below.