Addressing the topic of ‘Marriage Equality and the Courts in the US’ during the Belfast International Homecoming will be Maureen Bennett, a partner with top US law firm, Jones Day. 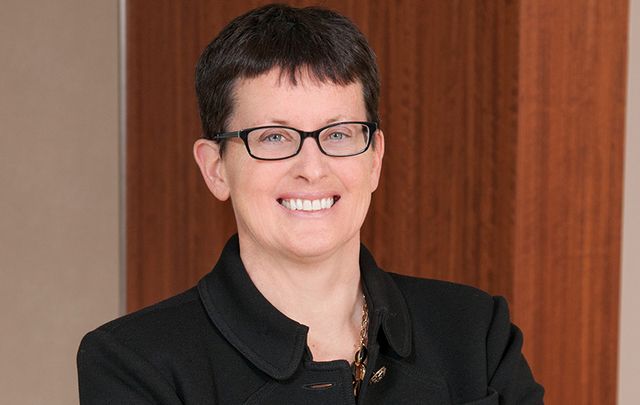 The United States Supreme Court decision of June 2015, which legalised same-sex marriage in all 50 US states, was the culmination of a decades-long battle through the courts to secure marriage equality for America’s LGBTQ community.

With that fight still being fought in the north of Ireland, the Legal Symposium at this year’s Belfast International Homecoming will focus on ‘Legal Resolutions to Political Problems’ with marriage equality joining language equality and legacy issues on the agenda.

Addressing the topic of ‘Marriage Equality and the Courts in the US’ will be Maureen Bennett, a partner with top US law firm, Jones Day. The Boston-based health care and life sciences lawyer is an industry-recognised leader in legal and ethical issues associated with clinical research and a long-standing LGBTQ activist. Maureen’s presentation at the Inn of Court in the Royal Courts of Justice on Thursday, 5 October – where she will also be joined by Judge Patricia Cottrell of the Tennessee Court of Appeal - will bring a US perspective to what she describes as “a very sensitive and timely debate” in the north.

“My goal will be to talk a little bit about the US path to achieving marriage equality, and at the same time, not withstanding the Supreme Court decision a few years ago, the  continuing legal challenges to ensuring equal rights for LGBTQ people in the US." said Maureen.

" In addition to marriage equality, legal issues remain regarding housing and employment discrimination. In addition, we are now facing challenges to equality based on religious liberty theories,  which arguably allow for exceptions to discrimination laws, based on a person’s religious beliefs. So, while the right to marry itself is the law  of the land, we're dealing with other obstacles."

Once such example mirrors the Ashers Bakery case here in Belfast where a Christian-owned baker's decision not to fulfil an order for a cake carrying a pro-marriage equality message was challenged in the courts and found to be discriminatory. The bakery's owners are now taking the case to the Supreme Court in London.   Similarly, the US Supreme Court is due to hear the case of a Colorado baker who refused to make a wedding cake for a same-sex couple, also citing religious beliefs as the reason for his refusal.

"These cases have implications, not only for the LGBTQ community, but for other sections of society," said Maureen. "It could impinge on issues such as women's reproductive rights, in areas such as contraception and so on. As always happens in civil rights, once equality is possible then comes the backlash: first comes advancement then retrenchment. This is the backlash so we gather ourselves together and get ready for the next fight."

Maureen acknowledges the importance of legal redress to the equality fight whilst also stressing the unpredictability of the courts.  She cites too, a composition of factors in the move towards marriage equality in the United States.

"The legal aspect has been important but a legal result is just one part of moving society forward.

"What we did see though was a cultural shift that provided further momentum and a tremendous swing in the number of people who counted themselves as being in support of marriage equality."

This move she attributes to trailblazers such as Harvey Milk, the first openly gay politician elected to office in California, who was assassinated in San Francisco in 1978.

"It's hard to remember how difficult it was for people to come out - and still is in many parts of the world – but what Harvey Milk did was bang the drum for people to do that. Part of what worked in favour of the movement was that when people did come out, parents, or sisters or friends who might not have been in favour of, or had concerns about, marriage equality moved towards a realisation and it became easier to move public opinion in a positive direction."

Nowhere was that cultural shift seen more plainly than in the south of Ireland which in May 2015 became the first country in the world to legalise equal marriage by popular vote. As an Irish American whose Cork and Tipperary grandparents married in Belfast before emigrating to the States at the turn of the 20th century, Maureen evinced her pride in the landmark decision. She recalls too however, encountering a very different attitude whilst taking part in a Pride march in Belfast in 1997.

"There was only a couple of hundred people there and some wore bags over their heads such was their reluctance to be recognised. People stood and watched us, although there was no abuse you could have heard a pin drop which was eerier in its own way. I've periodically thought about this and am aware of some of the long-standing attitudes so I will be interested to hear more about some of those arguments during my stay."

Maureen's address will take place at 1pm in the Inn of Court, Royal Courts of Justice, on Thursday 5 October.  She will be joined by Judge Patricia Cottrell of the Tennessee Court of Appeal and Solicitor Advocate Ciaran Moynagh who will speak on 'Marriage Equality: A Northern Irish anomaly'.