Irish man Jason Ryan, who now lives in Arizona, explains the impact that Irish donations and support have had on the Navajo Nation through COVID. 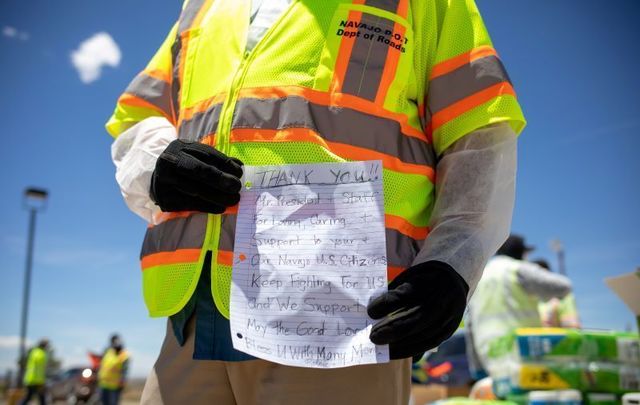 May 27, 2020: Navajo Nation President Jonathan Nez holds a letter of thanks he received from a family as he distributes donations. Getty Images

Irish generosity toward the Navajo Nation during the COVID-19 pandemic has helped attract multi-million dollar corporations to the cause, according to an Irishman who has been assisting on the frontlines of the Native American reservation.

Jason Ryan, a Co Clare emigrant living in Phoenix, Arizona, helped to organize and coordinate a massive donation drive in Arizona earlier this summer as the Irish community rushed to the aid of the Native American region with the worst infection per-capita in the entire country.

One particular donation drive was so big that more than 20 soldiers from the Arizona National Guard were called in to help distribute food, water, and other essential supplies on two 53-foot trucks as the Arizona Irish Center became a defacto emergency headquarters for the outbreak.

Hear from Jason Ryan, board member of the Irish Cultural and Learning Foundation, and mastermind behind the Navajo Nation Donation Drive. #AZIrish pic.twitter.com/wcS8vurpn2

Irish generosity, which has helped raise millions of dollars for the Navajo cause, has now captured American attention, Ryan said, and American citizens and corporations alike are now keen to do their bit for the stricken Native American community.

Many thanks to the @AZNationalGuard for helping us transport items to the #NavajoNation.

"One of the big things that I noticed is that a lot of Americans realized that they weren't doing enough themselves to help the native people. I think they questioned why it took huge donation drives from Irish people to help the Navajo people," Ryan told IrishCentral.

"I don't think people realized that they needed that much help. It educated people. It got people to say 'hold on, what am I doing? Why are these people from Ireland sending all this money and why is the Irish community in Phoenix doing so much when we can't even do it ourselves? What are we doing them for them?"

Ryan, who is the brother-in-law of Navajo Attorney General Doreen McPaul who has issued a heartfelt thanks for the Irish donations, said that corporations have also regularly donated to the cause since the issue caught national attention.

"I think a lot of corporations put the onus upon themselves to do a bit of good, especially during COVID. Their businesses are struggling, but if they can get a good PR story out there, then that will help their business."

Different corporations have been helping out almost every weekend over the summer, according to Ryan, and many of them are donating up to half a million dollars worth of essential supplies.

While the Irish community in Phoenix has taken something of a backseat in light of the major interest across the United States, Ryan insists that is still helping out in any way it can.

"We work with the corporations. If they need something, we're there to help them. The Navajo Nation wanted us to help with the distribution. And we always will be available to help. We have this bond now where we're there if we need each other."

The huge donation drives pouring in from all corners of the country have helped to mitigate the COVID-19 crisis on the Navajo reservation; the donations have enabled the Navajo Government to supply its citizens with essential supplies while simultaneously educating them about the pandemic.

Thankfully, there are now encouraging signs from the worst-effected region in the entirety of the United States.

The Navajo Nation has reported almost 10,000 cases of the coronavirus despite boasting a population of just 173,000, but things are finally starting to slow down.

Navajo authorities reported no new cases for the first time in six months last Tuesday and there have now been more than 7,100 recoveries in the region.

Ryan explained that Navajo authorities have been crucial to this, taking encouraging and decisive steps to control the spread of the virus.

"It was really important to distribute signs in Navajo. Some of the elders didn't have the English to understand the signs, but now they can understand them."

One of the most common causes for the uncommonly high infection rate in the Navajo Nation, according to Ryan, was the Navajo culture of physically calling upon relatives rather than ringing them.

Ryan told IrishCentral in May that a significant number of Navajo people prefer to physically call on their loved ones because the region is so remote and because WiFi and cell phone service are practically non-existent.

However, he said that Navajo authorities have taken steps to reduce these social interactions.

He said that authorities educated citizens not to visit sick relatives and attempted to confine outbreaks to single households.

"The Navajo Department of Health put people who contracted COVID in isolation, but they also contacted family members and educated them on the signs and symptoms to look out for."

Ryan also commended President Jonathan Nez, President of the Navajo Nation, for his decisive leadership during the pandemic.

"He's been very vocal. He focuses on the positives too. A lot of our media focus on the negatives, but he insists on talking about recovery rates rather than new infections to boost morale."

President Nez has also implemented weekend lockdowns in the Navajo region to prevent citizens from traveling to large cities like Phoenix or Flagstaff for the weekend and then bringing the virus back into the reservation.

These measures have helped to greatly reduce the spread of the virus.

Ryan, however, said that the Navajo Nation was apprehensively planning for a difficult winter.

"Some of them might be stuck at home for a month or two before they see anybody."

For many, getting water will be a real issue over the winter months.

"The rivers are dry during the summertime and frozen during the winter. It's kind of a catch 22. A lot of them have water for irrigation, but it's not the same as drinking water."

There is now a push to get as many essential supplies as possible to Navajo citizens in the coming two months, Ryan said, or else the Native American reservation could be facing into yet another crisis at the turn of the year.