The Navajo Nation in the US received an outpouring of support from Irish and Irish Americans in the early days of the pandemic. 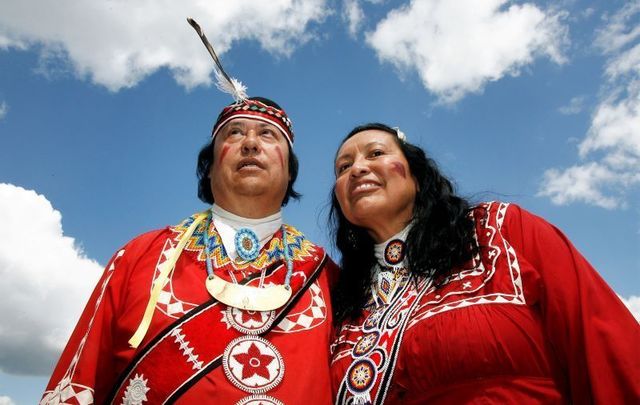 May 9, 2007: Choctaw Native Americans Gary and Dr. Janie Whitedeer visit with students at Gaelscoil Cholmcille in Santry to discuss their history and the Choctaw link with Ireland when their generosity in providing humanitarian relief during the Irish Potato Famine came decades before the red cross was created. RollingNews.ie

The Native American Navajo Nation has reported no new daily cases of the coronavirus for the first time since March.

The Navajo Nation in Arizona, New Mexico, and Utah experienced one of the worst outbreaks of COVID-19 in the United States and was subject to much international interest and support, especially from Ireland.

The Navajo Nation has suffered the highest per-capita infection rate in the United States with 9,903 confirmed cases and 527 coronavirus-related deaths since the outbreak of the virus.

However, the Navajo Department of Health reported on Tuesday that no new cases had been diagnosed in any of the Navajo Nation's 13 healthcare facilities.

There have been a total of 7,153 recoveries across the Navajo Nation, leaving the total number of active cases at just above two thousand, but Seth Damon, Speaker of the Navajo Nation Council, urged the Navajo people to continue to fight the spread of the virus.

"This is a milestone for the Navajo Nation, but it’s going to take the continuing efforts of our Navajo People to continue the reduction in numbers until a viable COVID-19 vaccine is available," Damon said.

Daniel E. Tso, Chairman of the Navajo's Health, Education, and Human Services Committee, said that the Navajo people had a long road ahead of them before they made a full recovery from the impact of the virus.

"We must be most reasonable that we are in a long journey to recover from the coronavirus on an individual basis, as well as a family, as a community, and as a Navajo Nation," Tso said.

Navajo epidemiologists are anticipating a spike in cases within the next week since a number of Native American families visited one another over Labor Day Weekend.

However, the news that there were no new daily cases for the first time since March will still be most welcomed as a beacon of light in a dark time for the Navajo Nation.

The news will also be a sliver of positivity for every Irish person who generously donated to the cause.

Irish people have contributed significantly to the $1.7 million raised on the official Navajo GoFundMe, while thousands of others have also donated to an unofficial GoFundMe that raised more than $4 million.

Irish people's generosity and support are directly related to the Native American Choctaw tribe's $170 donation to victims of the Irish Famine in 1847. The Choctaws, who had recently embarked upon the Trail of Tears, pooled what little money they had to provide some relief to the Irish Famine victims, forging a bond between Irish and Native American people that has persisted to this day.

Doreen McPaul, Attorney General of the Navajo Nation, issued a heartfelt thanks on behalf of the Navajo people in May to recognize the generosity of Irish people in the Navajo's fight against the COVID-19 pandemic.