Richard O'Halloran was permitted to leave China on Friday following lengthy negotiations between the Irish Department of Foreign Affairs and Chinese authorities. 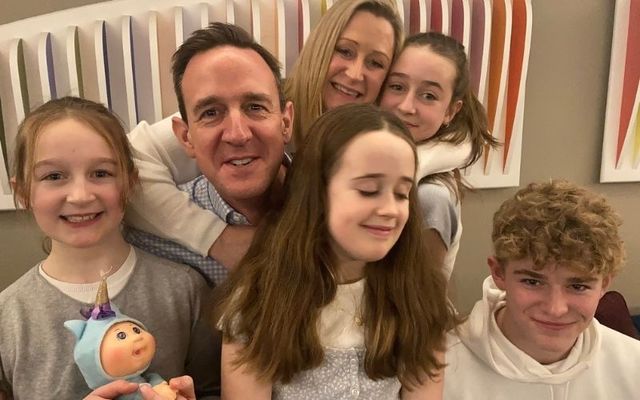 Irish businessman Richard O'Halloran has been reunited with his wife and four children after he was permitted to leave China following an enforced stay of almost three years.

O'Halloran was permitted to leave China on Friday following lengthy negotiations between the Irish Department of Foreign Affairs and Chinese authorities.

He arrived at Dublin Airport on Saturday morning, where he was reunited with his wife Tara and his four children Ben, 15, Amber, 12, Bella, 10, and Scarlett, 8.

"This is a day of great happiness and emotion as I rejoin Tara, Ben, Amber, Isabella, and Scarlett after three years," O'Halloran said in a statement following his arrival in Ireland.

"There was considerable input by a number of key individuals who were central in helping to arrive at this positive outcome and it is also important that I take this opportunity to thank and to express my sincere appreciation and that of my family, for the incredible support we have received over the past three years.

"My wider family and friends of the family have been so important in the support they provided both in a practical and emotional sense; and with Tara, I express our sincere gratitude.

"I would like to sincerely thank The President of Ireland, Mr. Michael D. Higgins who wrote to his counterpart in China."

He said that he is now looking forward to "doing normal everyday family things" following his return to Ireland.

His wife Tara posted a picture of the newly-reunite family on Twitter and said that they are "so unbelievably happy to have him back".

Thank you everyone for all your support. We are so unbelievably happy to have him back… pic.twitter.com/HCvehlOw7n

O'Halloran had been prevented from leaving China since February 2019 over a legal dispute between the Chinese authorities and China International Aviation Leasing Service (CALS), the airline leasing company that he worked for.

Min Jiedong, the chairman of CALS, was accused of raising funds from Chinese investors to buy an Airbus aircraft in a crowdfunding scheme that predated O'Halloran's time at the firm.

Chinese police alleged that Min had raised up to $36 million from Chinese investors.

Although O'Halloran was never accused of any wrongdoing or charged with any crime, he was prevented from leaving China and authorities placed an exit ban on his passport.

His family said that the ordeal took a toll on both his mental and physical health.

While O'Halloran was prevented from leaving China, he was permitted to move freely within the country.

O'Halloran made two appearances at a Shanghai court this week to finalize the financial arrangements and future commitments made in exchange for the lifting of his exit ban.

The financial commitments are understood to relate to future payments from the income on the aircraft purchased through the crowdfunding scheme.

The aircraft will also be returned to the Chinese authorities when the lease agreement ends in 2026, the Irish Times reports.

O'Halloran's company is currently making monthly payments of $100,000 to the Chinese authorities.

The Chinese Embassy in Dublin said that it is expected that O'Halloran "continues to fulfill his pledges and commitment and undertake his corresponding legal obligations".

Remarks of the Spokesperson of the Embassy on the lifting of exit ban on Mr. Richard O’Halloran pic.twitter.com/NQ8kjlxgTo