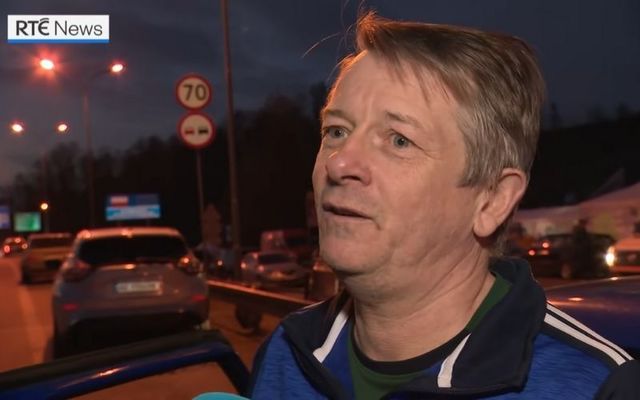 Brendan Murphy, an Irish man who was living in the Ukrainian capital of Kyiv, has made it safely across the Polish border with his family amidst the Russian invasion.

Murphy, from Omeath in Co Louth, crossed the border on March 3 after a week-long journey from Kyiv with his wife Marine, and Marine's 90-year-old mother, 18-year-old daughter, and three-year-old granddaughter.

Murphy told RTÉ correspondent Paul Cunningham that he was left Ukraine with "divided emotions", stating that a part of him wanted to go back and help while another part wanted to go home to Ireland.

He said he planned to bring his family to Warsaw to regroup before they could consider their next step about making it home to Ireland.

Murphy said the parks and houses surrounding his house in Kyiv have been destroyed during the Russian invasion.

"The park, the houses that we knew, they’re all destroyed now. A baby was killed this morning. There's tanks shooting into private housing and there's one road that's just piled high with destroyed Russian tanks and trucks," Murphy told RTÉ.

"My job was to stay as far away from that as possible without putting too much stress on an 90-year old and a three-year-old."

Murphy said his mother-in-law "wants to walk to Ireland" because she is so sick of being in the car for up to 20 hours every day.

He added that he had received "warm and encouraging" support from all over the world as he made the arduous journey to the Polish border and paid tribute to friends and family in Ireland.

"The humanity and the warmth of people have been incredible and I really, really appreciate everybody at home very strongly."