A NUI Galway student from Donegal has won the Enterprise Ireland’s Student Entrepreneur of the Year Award for developing technology for detecting early prostate cancer. 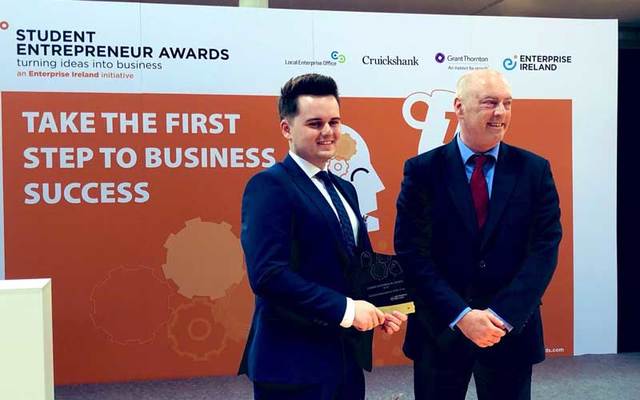 Christopher McBrearty, the winner of the Enterprise Ireland’s Student Entrepreneur of the Year Award. Twitter/@studententrepreneurs

A NUI Galway student from Donegal has won the Enterprise Ireland’s Student Entrepreneur of the Year Award for developing technology for detecting early prostate cancer.

Christopher McBrearty, a Biomedical Sciencet MSc student from Killybegs, was awarded €10,000 to develop his company, NanoDetect. He will also receive mentoring from Enterprise Ireland to develop his concept, reports the Donegal Daily.

"Our core goal is to reduce patient waiting time with quick test results and to help educate and raise awareness around prostate cancer," said McBrearty said.

"Our future goal is to be the breast check equivalent for men and to eventually bring our technology into other routine screen procedures for disease types.”

McBrearty was one of 10 finalists for the award.

The winners were announced at Enterprise Ireland's Student Entrepreneur Awards 2019 in Cork on June 7. This is the 38th year of the awards.

All of the winners will share in a €30,000 consultancy fund to develop the commercial viability of their ideas.

The remaining six finalists were given Enterprise Ireland Merit awards along with €1,500 per team, reports the Donegal Democrat.

Read More: Irish student to have an asteroid named after him after winning at science fest

Richard Murphy, Manager for Micro Enterprises and Small Business at Enterprise Ireland, said: “Students are no longer in the mindset of going to third level education to help get themselves a job. Many are going to third level education to shape their job and to create the businesses they want to work in. The Student Entrepreneur Awards helps to foster that entrepreneurship."

More information on the Student Entrepreneur Awards can be found at www.studententrepreneurawards.com