Irish signage was introduced on a bus route in West Belfast in order to give the Irish language the "recognition it deserves". 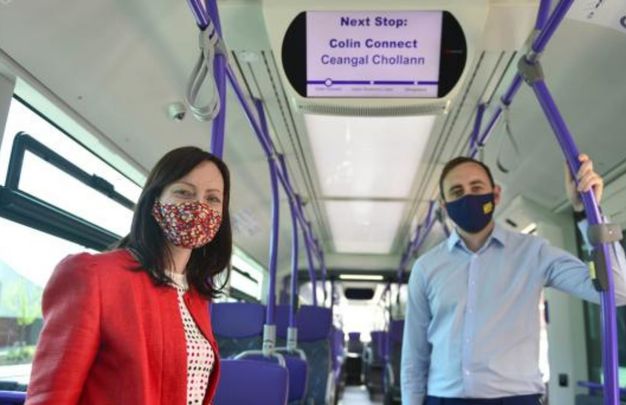 Irish language signs have been introduced on a bus route in Northern Ireland in a move that has been welcomed by nationalist communities.

West Belfast Glider services from Millfield to McKinstry Road will display bilingual "next stop" signs onboard, while passenger information boards at the Colin Connection Hub will also display messages in both Irish and English.

The bilingual "next stop" signs were introduced on Wednesday, April 21, three years after the route was launched in 2018.

Translink, who operates the route, did not include Irish language signage on the route when it was launched and said at the time that the signs would be introduced "in the coming months".

"While there is much more to do to ensure language equality, I am pleased that my department is delivering and building on progress," said Mallon, an SDLP MLA for Belfast North.

"My Department and Translink have worked closely with local stakeholders Forbairt Feirste in bringing this work forward and I am convinced this will be very much welcomed by the local community," she said at the launch of the bilingual signage at the Colin Connection Hub on Wednesday.

Mallon said that she planned to introduce more Irish language signage on Northern Irish public transport in the future.

"Growing numbers of people use the Irish language on a daily basis and this is a further recognition of that," Sheehan told the Belfast Telegraph.

"I would like to see this bilingual signage extended to other parts of the route and the public transport network."