Ireland's hospitals are facing unprecedented pressure as two worrying records were set in the country's fight against COVID-19. 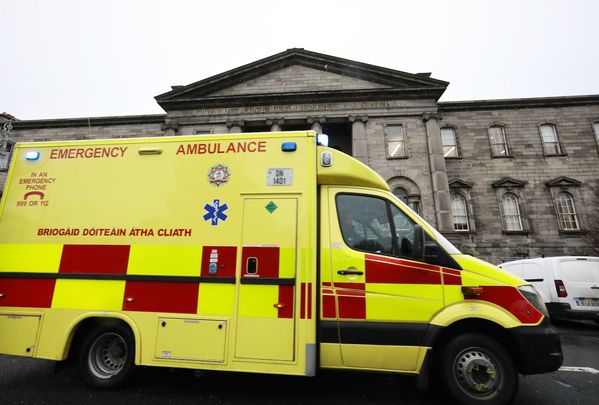 An ambulance at the Mater Hospital in Dublin on Tuesday morning. RollingNews

The number of people in hospitals across Ireland with the killer virus exceeded 2,000 for the first time earlier this week, while 200 of these patients were being cared for in intensive care units, representing another unwanted high in the fight against the pandemic.

The grim figures mean the number of patients in hospital with Covid-19 has increased every single day since December 26, before peaking at 2,023 on Monday.

The mounting crisis facing Ireland's hospitals was described by Chief Medical Officer Dr. Tony Holohan, as "stark,” as he revealed that people of all ages are now being treated in intensive care units.

He said, "We are seeing people of all ages being admitted to hospital and being taken into intensive care units.

"The levels of infection are such that your chances of transmitting or getting Covid-19 are very high, and we know that a proportion of these cases will lead to serious illness and mortality.

"There is no group who should feel the public health advice does not apply to them."

His warnings were echoed by Health Minister Stephen Donnelly, who admitted in an RTE interview that ICU figures were likely to rise even further, adding, "The situation will get worse before it gets better."

Such is the pressure on the public health facilities that even beleaguered publicans and hoteliers, all currently closed for business during the country's third lockdown, have offered their premises to help with the vaccine rollout.

The Licensed Vintners' Association told the Irish Mirror that pubs and hotels intend to formally outline their ambitious plan to the government this week.

Meanwhile, concerns are growing over the transparency of the country's vaccine rollout after it emerged that two maternity hospitals in the Irish capital gave the Covid-19 jab to family members of staff.

On Monday it was confirmed that two family members of staff at Dublin's Rotunda Hospital received jabs.

Earlier it had emerged that 16 family members of staff at the Coombe Maternity Hospital had received “spare” doses of the vaccine.

The controversy comes as many healthcare and other frontline workers across the country remain in the dark as to when they will receive their jabs.

Simon Harris, minister of state for higher education and a former health minister, said he was very concerned to learn of the
development.

"There are no spare vaccines in our country," he told RTE.  "It's a ridiculous phrase.  There are many, many people, including frontline healthcare workers, who are awaiting their vaccine."