Niall Burgess of Ireland's Department of Foreign Affairs persuaded his staff to gather in close proximity, flouting COVID rules, for the selfie that sparked the controversy. 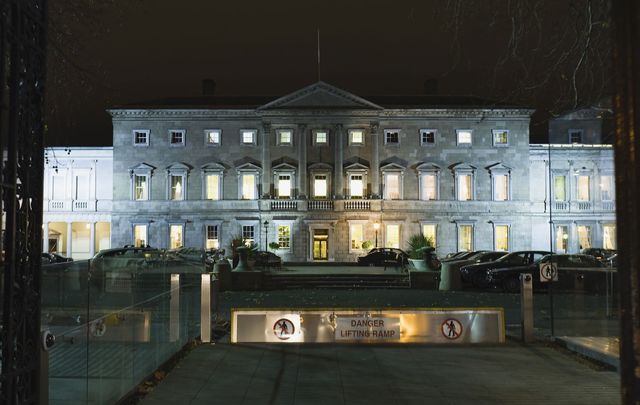 While British Prime Minister Boris Johnson faces a leadership crisis following a damning report this week on parties at 10 Downing Street during Covid, Ireland faces its own storm over a champagne do at the Department of Foreign Affairs during lockdown.

As Ireland starts to return to the offices with pandemic hospital figures falling, Minister Foreign Affairs Simon Coveney on Tuesday dismissed a Sinn Féin call for an independent inquiry into events at the department during which Covid protocols were breached.

The Sinn Féin demand followed a report on Monday that staff huddled together for a selfie photograph after a sparkling wine celebration of Ireland’s vote to a seat at the UN Security Council in June 2020.

Niall Burgess, who was secretary-general at the Department at the time – he is now ambassador to France and Monaco and a former consul general in New York – persuaded his staff to gather in close proximity for the selfie. They broke anti-Covid distancing guidelines in the process, according to a review carried out in recent weeks and reported on Monday by the current secretary general of the Department Joe Hackett.

Coveney, who was not there for the selfie but arrived in the department an hour later, has faced strong criticism from the opposition in recent weeks as details of the gathering emerged prior to the official review.

He told RTÉ Radio on Tuesday, “I don’t see what else there is to know here. Clearly, this shouldn’t have happened. It was a moment of celebration that was careless.”

Coveney said he did not speak to Burgess, saying “I trusted him.” However, he accepted that with the benefit of hindsight, he should have spoken to him. “This event was completely uncharacteristic,” he added.

Coveney said it was the responsibility of the secretary general to deal with what he saw as a “workplace mistake.”

He added that “any fair-minded person will view this as a fair report” when asked about the independence of the review.

But earlier, Sinn Féin finance spokesperson Pearse Doherty said that the internal review did not provide accountability because Coveney’s role was not covered.

Doherty said that the minister “did nothing” on the night when he was alerted to the breach of Covid-19 restrictions and only set up an investigation to try and “bury” the issue when he was forced to.

He added, “In my view, this minister, in particular, hasn’t learned any lessons from the Katherine Zappone scandal.”

Irish American Zappone, a former minister for children and youth affairs, last August declined a role as special Irish envoy to the UN for freedom of opinion and expression after critics claimed it was a made-up appointment that wasn’t advertised or subject to competition.

The report into the champagne party – called that because four bottles of sparkling wine were produced by two senior officials – said former Burgess and two other senior officials had agreed to donate €2,000 and €1,000 each to charity as recognition of the mistakes they made on the day.

Hackett, who succeeded Burgess as secretary general of the department, said he did not intend to take further action.

The Irish Independent reported that €2,000 from Burgess’s €213,000-a-year salary will be small change for a breach of Covid rules while the country was under severe restrictions.