Health Minister Simon Harris has suggested that Irish farmers could supply cannabis for a medicinal-use scheme. 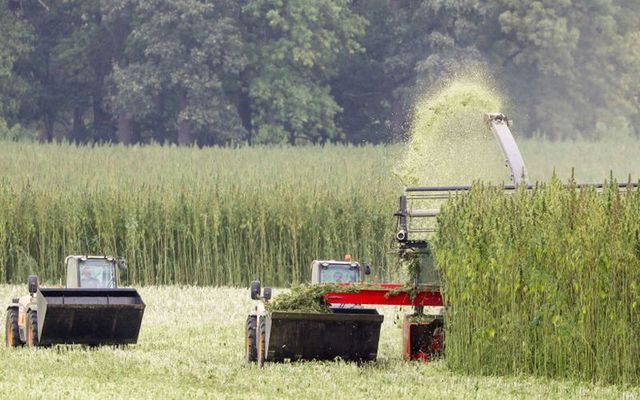 Farmers with their specially developed harvesting machines crop a cannabis field in Naundorf, eastern Germany, on September 19, 2018. - The Mariplant company, a subsidiary of Canadian producer Maricann, cultivates the legal medical cannabis on around 170 hectares to gain the cannabidiol substance. JAN WOITAS/AFP/Getty Images

Health Minister Simon Harris has suggested that Irish farmers could supply cannabis for a medicinal-use scheme.

The Irish Farmers' Association has told TheJournal.ie that they are willing to meet with Irish Minister for Health Simon Harris regarding comments he made on the possibility of Irish farmers growing cannabis for medicinal use in Ireland.

Two years ago, a scheme was announced by the Irish government that would allow for the medicinal supply of cannabis for the treatment of patients with multiple sclerosis, those experiencing nausea and vomiting associated with chemotherapy, and those with severe, refractory and treatment-resistant epilepsy.

The implementation of the scheme has been delayed, however, as the Irish government struggles to secure a quality-assured supplier from outside the country who will export into Ireland.

Speaking recently on RTÉ, Minister Harris acknowledged that the scheme had been delayed as the “lack of availability of cannabis products in Ireland remains the most critical barrier to full implementation.”

“This is not about recreational use and people smoking joints," he said, adding that he would be open to the idea of Irish farmers growing the drug.

“This is about using in a controlled way, in a monitored way, with the support of your clinician, a product that could ease your pain and suffering after you’ve tried all the conventional treatments.

“This is a major priority for me and I really want to see this happen in 2019.

"I think it could be an opportunity for Irish farmers in due course," he continued.

"Does it make sense to grow your own in Ireland rather than be dependent on importing a product? I think, quite frankly, it does."

The Minister added that it seems "the sensible thing to do" for Ireland to grow its own supply, a suggestion that the IFA has said it is open to, as Irish farmers find it increasingly difficult to turn a profit.

"We note the minister’s comments with interest. Farmers always consider the merits of any potential diversification and we are open to meeting with the minister to discuss this matter, should he wish," a spokesperson from the Irish Farmers' Association told TheJournal.ie.

Do you support the use of medical marijuana in Ireland? Let us know your thoughts in the comments section, below.