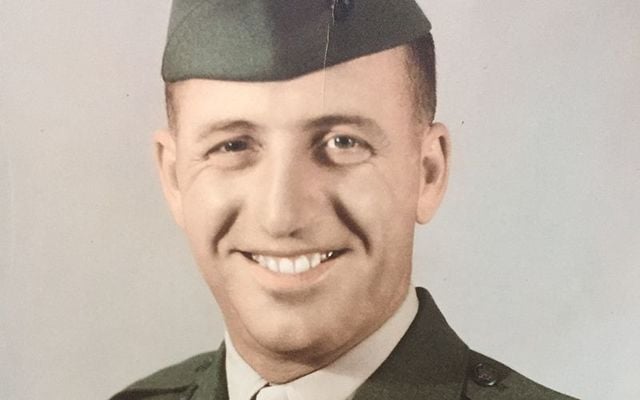 Dubliner Chris Devoy, not unlike his native county’s footballers, is contemplating three in a row.

That would be today, tomorrow and Sunday.

Today is the 242nd birthday of his beloved Marine Corps, in which he served for twenty years.

Tomorrow, Saturday, is Veterans Day and Chris will join his adopted nation in saluting all those who have served in military uniform, and particularly those who made the ultimate sacrifice.

On Sunday, November 12, Chris will have cause for pride and celebration when he steps off as Grand Marshal of the 33rd annual Bronx Veterans Day Parade.

Christopher J. Devoy came to America in 1952, a time when many of his fellow Irish men and women were making the Atlantic crossing.

Six months after making landfall in America, Devoy enlisted in the Marines and, according to a release from parade organizers, “served with honor, courage and commitment during a twenty year career retiring in 1973.”

As a Communications Chief Master Sergeant, Devoy was deployed in multiple locations and roles during his two decades in uniform.

He served at the height of the Vietnam War supporting combat operations in Khe Sanh, Chu Lai, Da Nang and Hue.

Devoy is a resident of the Edgewater Park section of Throggs Neck where he raised his family. The parade he will lead on Sunday steps off at noon at East Tremont and Lafayette Avenues and will end with a ceremony at the Bicentennial Veterans Memorial Park.

Devoy is a member of the Marine Corps League and the Throggs Neck American Legion Post 1456.

Meanwhile, back across the Atlantic, Veterans Day in the U.S. is also being marked and this year is a standout for one Ireland-based American Legion Post.

The members of John F. Kennedy Post IR 63 are mounting an operation, specifically a search that has as its goal the ensuring that every American military veteran buried in Ireland has a proper marker identifying them as an American veteran.

Said Post Commander Liam Kane: “many soldiers who fought for the USA are buried in Ireland and we feel it is our duty to make sure the grave has a proper marker.”

“Our membership roster contains several combat veterans of the Vietnam War,” he said.

The Dublin-based Legion Post is hoping to receive support from the Irish media to help identify those soldiers, sailors and airmen who served in U.S. uniform going back to World War I.

Post Adjutant, John Flood, has researched some records, but stated: “only with the families’ help will we be able to identify and mark those graves.”

Along with other American Legion posts in Ireland, members of the Kennedy Post have identified some graves and have provided proper burial honors to the families of the veterans.

“We are also looking for corporate sponsors to help us raise money to purchase permanent grave markers,” said John Flood.

Each grave marker costs about $50.

“We would especially encourage USA-based companies with a presence in Ireland to support our project,” Flood added.

The project begins Saturday, Veterans with the first phase to be completed by Memorial Day next year, that being the last Monday in May.

John flood can be contacted at floodmail@gmail.com