Sinn Féin and the DUP have united to condemn the intimidation of Catholic families in a shared housing estate in East Belfast – threats that have resulted in four families moving. 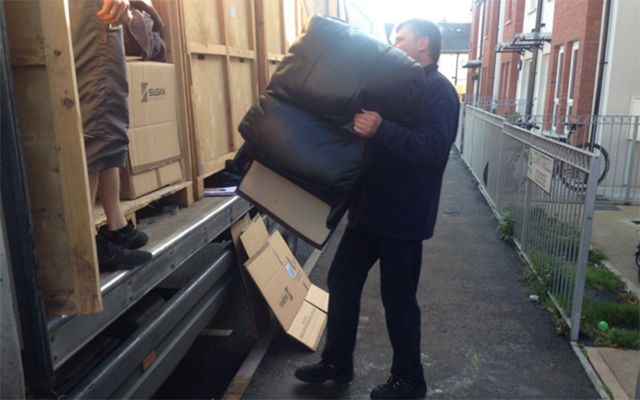 Catholic families have been forced to move out of the East Belfast housing estate. Belfast Media Group

They don’t typically agree on very much but Sinn Féin and the DUP have united to condemn the intimidation of Catholic families in a shared housing estate in East Belfast – threats that have resulted in four families moving.

In a joint statement, also signed by the SDLP, Alliance and the Green Party, the parties called for the threat that has resulted in the four families quitting Cantrell Close development to be lifted.

The statement was issued ahead of the October meeting of Belfast City Council and comes after the DUP were criticized for their response to loyalist paramilitary flags being erected in a development which was conceived and designed to be free of sectarian displays and threats.

"We as political leaders condemn all forms of sectarianism, intolerance and threats of violence,” the joint statement said.

"Four families have been forced to leave their homes in South Belfast. This is wrong. Any threat to these families should be lifted immediately.

"There is also an onus on the PSNI and the statutory agencies to provide immediate and appropriate support to the affected families, including re-housing those affected if they feel unable to remain in their homes.

"This situation runs absolutely contrary to the ethos under which the Cantrell Close development was created.

"Everyone has the right to live in a society without fear of intimidation and free from sectarianism. Those behind this threat offer nothing but hatred and division and should be condemned by all political, community and statutory leaders.”

A Sinn Féin delegation met with senior PSNI officers regarding the threat on Monday with Máirtín Ó Muilleoir MLA again blaming the UVF despite their denials through intermediaries.

“Four families have so far left their homes in the Cantrell Close development due to the threat and the PSNI today confirmed that loyalist paramilitary involvement is a strong line of inquiry. It remains our view that the organization responsible is the East Belfast UVF,” Ó Muilleoir said.

Thnx RadiusHousing & NIHE for rapid work 2 ensure Jodie & her family got a new home today after being forced from Cantrell by paramilitaries pic.twitter.com/nm7d9Vi0Dr

"Clearly that raises serious questions about the level of support offered to the affected families, particularly in terms of providing additional security and today the police provided reassurance that they would be stepping up security in the area.

"Some of those threatened are still in their homes, five days after police officers visited them in the middle of the night to warn of the threat against them and there has been a lack of information regarding what is being done to assist them.

“These families need to know that every possible step is being taken to protect them and there is an onus on all political, community and statutory leaders to stand firmly by the families affected.”