The McGuinness effigy brought especially critical attention to the annual 11th night bonfires which this year also saw a racist banner aimed at a soccer player with Glasgow Celtic. 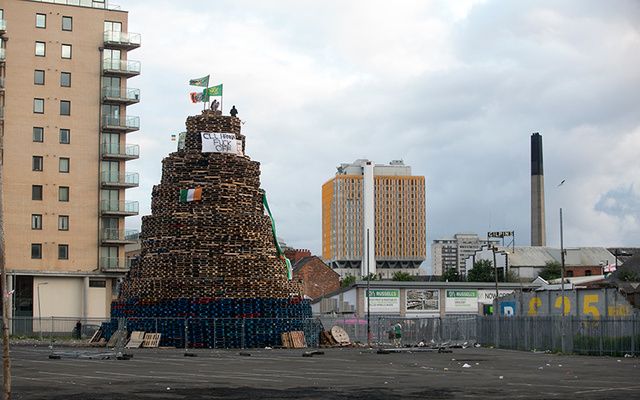 A leading Irish American member of Congress has condemned as “bigotry” the burning of a Martin McGuinness effigy in a loyalist bonfire.

Congressman Peter King decried the “bigotry against Martin McGuinness” describing it as “disgraceful.”

“After all these years it is unfortunate that the hate mongers are still around,” said the Long Island Republican member of the House of Representatives.

King’s has been a prominent voice in Congress on matters related to Northern Ireland over the past three decades.

He has penned a trilogy of novels set during the Troubles.

Fr. Sean McManus of the Washington, D.C.-based Irish National caucus also condemned what he described as the “insult” to Mr. McGuinness and his memory.

And the late Deputy First Minister’s son, Emmet, has stated that he has forgiven loyalists who burned the effigy – a coffin with a cut out of his father’s face – in an East Belfast “11th Night” pyre.

Sickening displays like this must be condemned by all! Unionist politicians need to show leadership & end this annual hate-fest pic.twitter.com/i4MUCmS199

Nevertheless, McGuinness said it was time for the "annual display of hate to end."

The McGuinness effigy brought especially critical attention to the annual 11th night bonfires which this year also saw a racist banner aimed at a soccer player with Glasgow Celtic, and the burning of election posters from Sinn Féin, the SDLP and Alliance.

A number of bonfires in Belfast were built so close to apartments that windows cracked and lives were put at risk.

I am very thankful that I was raised by parent's never to hate anyone or anything. @moneillsf is right, the annual display of hate must end.

However, because of the sensitivities that surround the bonfires, firefighters are prevented from putting the dangerous fires out so have to instead spray the apartment blocks to prevent the catching fire.

In a bid to keep the size of these blazes at a reduced size, Belfast City Council sought legal injunctions to prevent any more wood being piled on the pyres.

However, these measures were largely ignored due to the PSNI’s failure to enforce the law.

Sinn Féin councilman Jim McVeigh said the bonfire issue had to be tackled.

“The removal of illegal bonfire material which was being stored on council land actually took place in the early hours of Thursday 22nd June,” he said.

"This information was withheld from Sinn Féin during discussions with council officials on the afternoon of Thursday 22nd June.

"This came on top of repeated instances of information relating to the council’s conduct on bonfires being withheld from Sinn Féin.

My posters have been placed on top of a bonfire. I have reported this hate crime & theft to PSNI to allow them to act urgently. pic.twitter.com/Qu9WuD0SeZ

"Sinn Féin called for a number of actions to be taken on this issue. A decision was then taken at the Strategic Policy and Resources committee meeting this morning that the council’s Chief Executive will head an investigation into this entire scandal with an independent element included.

"A decision was also taken that any remaining bonfire material being held by Belfast City Council will not be returned and, importantly, that the storing of material for bonfires will never happen again.

"This is a disgraceful episode, which will need thoroughly investigated.

"The ratepayers and citizens of Belfast deserve no less than the highest standards from their council and on this occasion clearly those standards have not been met.

"Sinn Féin will be monitoring the investigation closely."

On a brighter note, a North Belfast parading agreement that saw a loyalist protest camp dismantled last year passed its first major test. The success of that agreement has seen the parading issue largely resolved in the area.