Irish America’s largest fraternal organization claim the U.S. government disengaged too early from the implementation of the Good Friday Agreement. 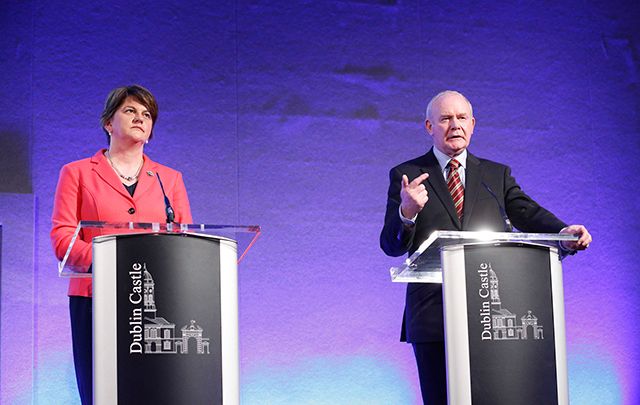 The Ancient Order of Hibernians has expressed its support for the decision by Martin McGuinness to resign as Northern Ireland Deputy First Minister.

But as the North faces into heightened political uncertainty, and a likely election, Irish America’s largest fraternal organization is also pointing an accusing finger at the United States, and specifically the administrations of both President Barack Obama and his predecessor, George W. Bush.

Not surprisingly, the Democratic Unionist Party (DUP) and the British government also come in for a Hibernian tongue lashing.

“The continuing intransigence by members of the DUP to embrace the core principles of equality and respect that are the basis of the Good Friday agreement, the growing litany of corruption scandals and the DUPs failure to take accountability and deal effectively with a crisis of confidence in the institutions of government amongst the people of Northern Ireland left Mr. McGuinness no option but to resign or be complicit in a travesty,” said a Hibernian statement, issued by the order’s National Political Education Chairman, Neil Cosgrove.

“The AOH supports Mr. McGuinness’ decision and they hope that his principled decision will result in real reform and a return to the principles of the Good Friday Agreement,” said the statement.

The statement continued in part: “Nearly two decades ago, the United States was pivotal in brokering one of the great triumphs of diplomacy, the Good Friday Agreement, paving the way to end the conflict known as ‘The Troubles,’ proportionately one of the deadliest in human history.

“Sadly, far too often Deputy First Minister McGuinness’ attempts to build bridges have been reciprocated by the construction of bunkers by members of the DUP.

“The continued churlish behavior of DUP members to anyone who expresses an Irish identity, specifically those who wish to embrace the Irish language, are more in keeping with the imperial attitudes of the 19th century rather than the 21st.

“The slashing of funding on Christmas Eve for a scholarship program to enable students to study the Irish Language while the same DUP minister proposed six times that funding for the flute bands of the loyalist community is as rooted in cowardice as it is in cultural triumphalism.”

The Hibernian assessment of the deteriorating political landscape pointed to the collapse of the government in Northern Ireland occurring at a time when the “bright prospects” of the Good Friday Agreement were already under great strain.

“The British government, a co-guarantor of the agreement, has forsaken its responsibilities under the agreement; specifically their intransigence in addressing the legacy issues of the past so as to allow the people of Northern Ireland to look to the future.”

The British government had embraced Brexit, “indifferent to the desire of the people of the North to remain in the European Union.”

Britain had also dismissed the concerns of the people of the island of Ireland regarding the prospect of the imposition of hard borders and the “chilling effect” that would have on the peace process.

“Brexit also means the loss of the protections of the European Convention on Human Rights (ECHR) and highlights the failure of Stormont to work toward a Bill of Rights for the people of Northern Ireland as called for in the Good Friday Agreement.

“Statements by British Prime Minister Theresa May characterizing Britain opting out of the protections of the European ECHR as ‘British soldiers will never again face a legal witch hunt’ is callously tone-deaf to the pain of the families of victims of the Ballymurphy Massacre and Bloody Sunday, who four decades on are still waiting for members of the Parachute Regiment to be held accountable.”

The U.S. had to face some accountability for the deepening crisis, the Hibernians concluded.

And the crisis could see the promise of a great U.S. great diplomatic triumph, in the Good Friday Agreement, being squandered.

“The U.S. government has been premature to declare ‘mission accomplished’ and disengage from the Northern Ireland peace process while the difficult tasks of implementation are still a work in progress,” said the statement.

“For two presidential administrations, representing both political parties, there have been no questions asked as to the lack of progress on key elements of the Good Friday agreement, specifically of the United States’ closest friend and ally Great Britain.

“If the U.S. does not hold Great Britain accountable for the failure to live up to its obligations under Good Friday who will?”