It’s believed that local young people were responsible for the attack on Milltown Cemetery on the Falls Road. 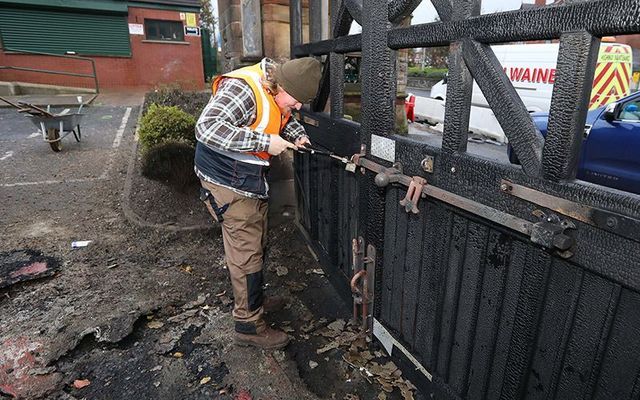 Repairs being carried out on the cemetery gates after the were set on fore over the weekend.

Condemnation has been swift after the gates of Belfast’s main Catholic cemetery were torched at the weekend.

It’s believed that local young people were responsible for the attack on Milltown Cemetery on the Falls Road.

The arson attack came after large groups of youths – who had previously gathered at the nearby Falls Park and adjacent City Cemetery – had been moved on in recent weeks.

They had been drinking and causing trouble late at night.

An angry West Belfast MP Paul Maskey said: “The young people who carried this out most likely have relatives buried in this graveyard and it’s appalling that they would even consider causing destruction in this way and dishonor the memory of their loved ones.”

He added: “Sinn Féin called a special meeting of the People and Communities Committee of Belfast City Council last Wednesday at which we proposed that extra resources be put into the Falls Park to counter anti-social behavior.

The burning gates of Milltown Cemetery on the Falls Road.

“As a result of this, extra safer neighborhood wardens are being put into the park and the council will also be moving to employ mobile attendants who will have a specific responsibility for safety within parks in West Belfast.”

“While I was in the cemetery this morning I spoke to many relatives of people who have loved ones buried here. They expressed their anger and sadness that a small minority of young people could even consider doing something like this.”

SDLP Councilor Tim Attwood added: “Those responsible for this callous attack on a place of remembrance and reflection have no respect for this community or those who come here to pay respects to loved ones.

“This is a disgusting attack and those responsible must be brought to justice.”

PSNI Area Commander for West Belfast, Chief Inspector Kellie McMillan, said: “This is a cemetery, a graveyard, a place for quiet reflection to peacefully pay respects to loved ones who are no longer with us.

“This is not acceptable behavior and a robust response from policing and the criminal justice sector is required.

“I am appealing to parents and guardians to know the whereabouts of their children and who they are with and to play a role in preventing them from becoming involved in behavior which could see them end up with a criminal record.”