West of Ireland community heartbroken after vandals destroy their church

The Holy Trinity Church on the Errislannan peninsula in Clifden suffered extensive damage after act of “utter vandalism.” 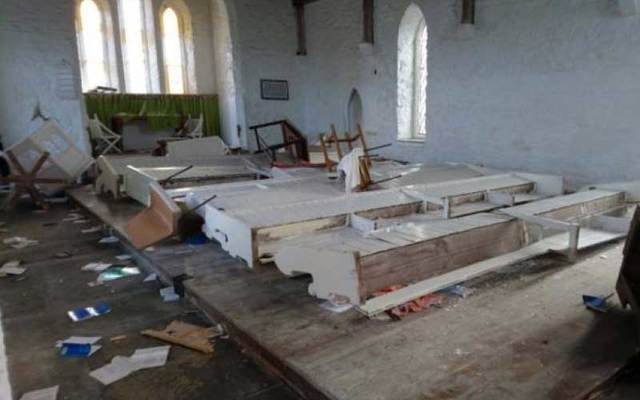 Damage to the Holy Trinity Church on the Errislannan peninsula. GoFundMe/Errislannan Church Appeal

Church of Ireland parishioners in the West of Ireland have been left heartbroken after vandals destroyed their church.

The Holy Trinity Church on the Errislannan peninsula in Clifden suffered extensive damage after an act of “utter vandalism.” It will cost tens of thousands of euro to repair the damage, the Irish Independent reports.

Every window was broken and all of the pews were ripped from the ground. The church’s organs and electrical fittings were completely destroyed. A cross was pulled from the wall and a bible was thrown through the window. The pulpit was split in two.

The Very Reverend Stan Evans, who leads services at the church, which is open all year round but holds services during the summer months, said the level of damage “beggars belief.”

“I was at a hospital appointment in Galway when I got a phone call from a parishioner telling me we had suffered serious vandalism. When I arrived back I didn’t believe what I was seeing. It was just utter and complete destruction,” he said.

Rev Evans said he believes more than one person was involved in vandalizing the church.

“There is just too much damage for one person. The cross was pulled off the wall and I believe it was used to smash the organ, it’s the only thing that could have caused that damage.

He said the entire community was rallying around the congregation and promised that the church would reopen for services next summer.

“We will have a lot of work to do but we will get the church open again for service next summer. It just broke our hearts. 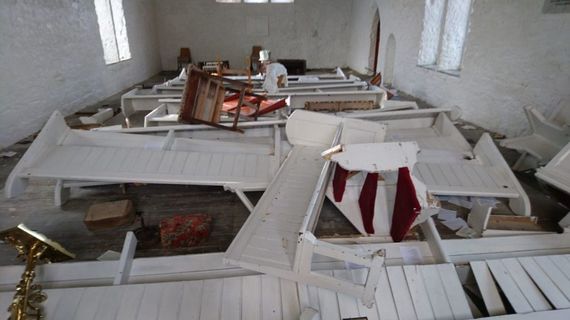 “I want to stress we have the most wonderful ecumenical spirit in the community. I work with the parish priest as one. We do everything together. They will be as heartbroken by this as we are,” he added.

Police are currently investigating the damage.

The Irish Times reports that after news of the vandalism spread, the church was inundated with calls of support.

“It is so encouraging,” said Rev Evans.

“People are offering to come and help but we can’t do anything at the moment because we are waiting for the gardaí to finish with the site and also the loss assessors are coming on Tuesday.

“After that the church committee will come together and we will draw up a plan as to where we go.

A GoFundMe page  has been set up for the church, and as of this writing, more than €10,900 has been raised. It is estimated that €70,000 is needed to repair the church.