A statue of the Virgin Mary was vandalized near Greencastle in County Tyrone, Northern Ireland last week, outraging locals and lighting up social media. 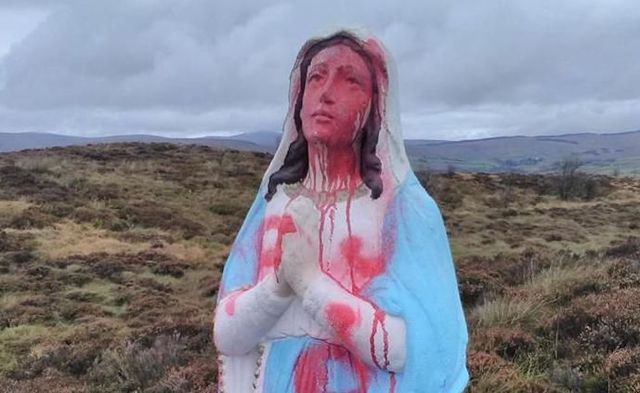 The still unidentified vandals daubed the word ‘whore’ in red paint across the front of the eight foot statue of the Virgin Mary.

A statue of the Virgin Mary was vandalized near Greencastle in County Tyrone, Northern Ireland last week, outraging locals and lighting up social media.

The still unidentified vandals daubed the word ‘whore’ in red paint across the front of the eight-foot statue, which is located near a historic Mass Rock dating from penal times when the practice of Catholicism was outlawed.

Vandals also reportedly attacked a nearby Catholic Church were graffiti was scrawled on the wall, although the separate church attack was not thought to be sectarian in nature.

Greencastle locals told the press they were mystified by what they called the "desecration’"of the statue, which was erected last year near a Mass rock at Crockanboy Hill.

Irrespective of the motive behind this, the defacing of Greencastle's statue of the Virgin Mary is a nasty and callous act of vandalism. pic.twitter.com/9DDTDqe9KT

In a message posted to the Greencastle parish website, Father Edward Gallagher urged his parishioners to pray for the people behind the attacks.

“The attack this weekend on the statue of the Blessed Virgin Mary on Crockanboy Hill is an attack on everyone in this community who believe in decency and tolerance,” he wrote.

“It follows a similar incident at Our Lady of the Wayside Church, Broughderg, in this parish last weekend.

“We should react by praying through the intercession of the same Blessed Virgin Mary for the conversion of those responsible and an end to attacks on all that the people of Greencastle parish hold dear.”

News spread throughout Greencastle this afternoon that the statue of Our Lady, on the hill overlooking the proposed site...

News of the attack lit up Facebook and Twitter, where thousands of commentators expressed their shock and disgust at the apparently sectarian act.

"It is unbelievable in today’s society where religious tolerance is such a vital element in a shared future that this level of hatred is still present in a sick minority of people," wrote one commentator on the Facebook group Greencastle Community Voices.

"What we do know is that we do not need despicable individuals like these coming into our area if their only aim is to provoke and intimidate the people of Greencastle. Maybe Gold is their God, maybe not, but we are pretty certain that whoever did this has absolutely no respect for the people in this community."

Have you ever experienced vandalism of a local religious object? Tell us about your story in the comments section, below.