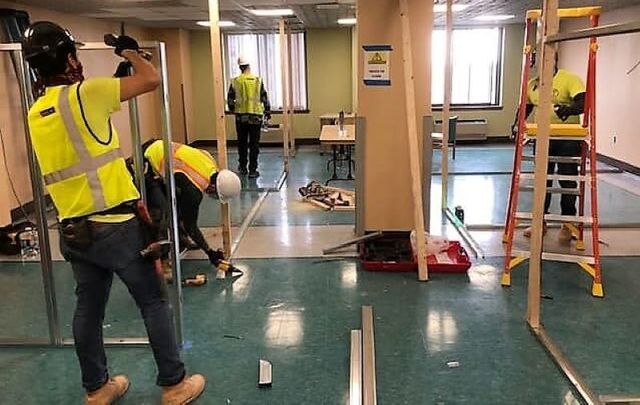 Hospital capacity for Covid-19 patients has been a primary concern for public health officials across the U.S., but thanks to an Irish construction firm working around the clock the past two weeks the problem is now less severe in East Orange, New Jersey, where an unused part of an existing hospital will reopen this week to deal with the needs of those diagnosed with coronavirus.

Archstone Builders, based on the West Side of Manhattan and founded in 2011 by David Stack, a native of Co. Dublin, was contacted by the U.S. Army Corps of Engineers on Wednesday, April 8 with an urgent mission: transform a 110,000 square foot shuttered part of East Orange General Hospital into a functioning facility where coronavirus patients could be treated.

Archstone, a growing contractor in the New York City area with more than 100 employees, was more than ready for the challenge according to Joe Moran, the firm’s director of construction.

“We looked at the job on Wednesday with the Army Corps and we mobilized the next day,” Moran, a native of Co. Limerick, told the Irish Voice.

Construction projects often go months beyond the deadline for any number of reasons, but Archstone wasn’t about to let that happen on what Moran calls one of his firm’s most significant assignments.

“It’s a very important project, and we took pride on meeting our deadline,” he says.

The new wing of the hospital, due to open on Wednesday, April 22, will accommodate up to 500 Covid-19 patients. East Orange Mayor Ted Green will attend the opening ceremonies.

Last week Archstone Builders started the conversion of an under used 100,000sf section of East Orange Hospital into a...

Read More: The two Irishmen in one of New York's most famous pictures

Archstone put a hold on some of its other jobs – the company specializes in commercial construction throughout the five boroughs, and is currently working on the headquarters of NYC Health + Hospitals -- to focus on the East Orange assignment.  A number of Irish subcontractors were called in to assist, including P. O’Connor and Sons; MC Electrical owned by Mark Comerford and Shay Furlong; H&L Iron Works founded by Liam McNelis; Tipp Floor Covering; Emerald Tile and Marble, and NU-Way Heating and Cooling and MRS.

The team, Moran says, literally worked around the clock, seven days a week, to get the job done.

“It’s been tiring for sure but we have had great support from everybody.  We manned up with our subcontractors to get it done.  The job was too important,” he adds.

“We worked in conjunction with the Army Corps, the Department of Health and our design team to finish on time. It’s a good feeling.”

Read More: Irishman in China will ship millions of masks and gowns to hospitals that need them