The Irish government announced on July 27 that a wedding can host 100 guests, up from 50, as of August 5. 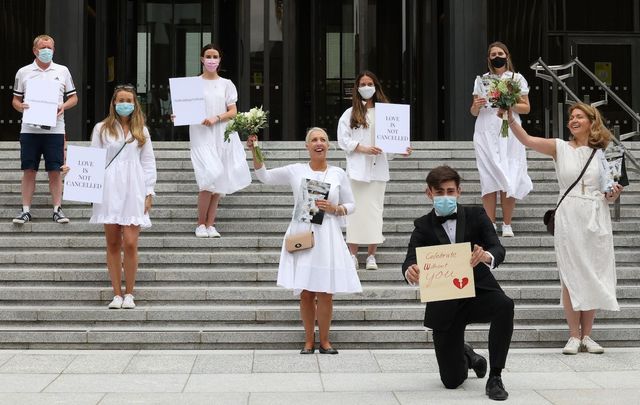 July 27, 2021: A group of brides-to-be outside the Department of Health in Dublin. RollingNews.ie

The brides, some of whom delayed their weddings for more than a year when Covid-battling attendances were as low as six including the marriage couple, gathered at the Department of Health in Baggot Street to march en masse to the Department of the Taoiseach at government buildings.

The Cabinet agreed to double wedding attendances in a U-turn following Tanaiste Leo Varadkar’s public advice last week that 50 guests would be the maximum allowed – a letdown for couples who believed the attendance figures would be higher from August 5. Varadkar’s statement prompted public demands for clarification.

Foreign Affairs Minister Simon Coveney told RTE Radio on Tuesday that that minister had agreed to double wedding attendances from August 5 to 100.

He said baptisms would be able to be resumed in churches in August but permission was still withheld for post-baptism family party receptions. He said, “We’re trying to avoid that because we are still dealing with a very aggressive and unpredictable variant of Covid.”

Coveney agreed that “a signal” had been given earlier in relation to weddings and many people had invested in a wedding date and so the Cabinet had decided on an exception for weddings.

That didn’t mean the same rule applied to every other event. “I do think weddings are special and they need special treatment, and that’s what they are getting,” Coveney added.

She added, in advance of the Cabinet decision, “We want to engage with the government on this, get our industry back on its feet, and provide certainty for couples who are extremely stressed and anxious.

“There are thousands of people in this country whose livelihoods utterly depend on weddings and they need to know if they are going to have a job come September.”

Fay said couples were “hugely upset” by Varadkar’s remarks last week that the number of people allowed to attend weddings next month was unlikely to increase to 100.

Also on Tuesday, the Cabinet extended the Covid-19 vaccination program to include all those aged 12 to 15.

A recommendation that all children in this age category be included was made to the government by the National Immunisation Advisory Committee (NIAC).

Vaccinations of a quarter of a million people in this age group could begin as early as next week so that they can be completed before the start of the new school term.

Thousands of restaurants and pubs reopened for indoor dining and drinking on Monday after almost 500 days of closure for some venues.

Padraig Cribben, chief executive of the Vintners Federation of Ireland, described it as “a day of relief” for the industry.

He said there was a high incidence of Covid-19 in many counties and a significant increase in hospitalizations over the past two weeks.