Ruairi O'Leocháin of Athlone's Wildlife Apiaries in County Westmeath decided to build the Lego beehive for "a bit of craic" and his creation has gone viral. 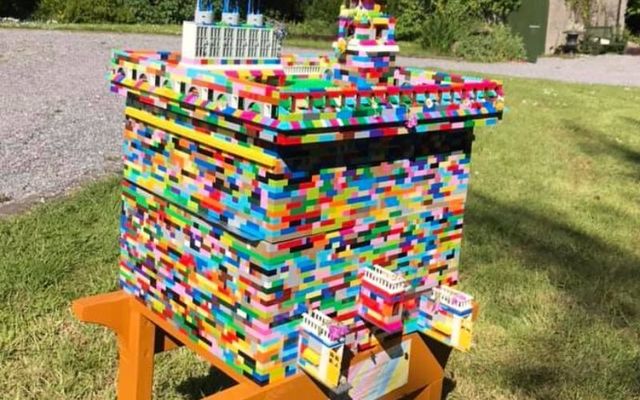 Irish beekeeper Ruairi O'Leocháin has come up with a novel idea during the COVID-19 pandemic. Athlone Wildlife Apiaries Facebook

An Irish beekeeper has found a novel way to pass time during the COVID-19 pandemic by making a fully functioning beehive made out of Lego.

Ruairi O'Leocháin of Athlone's Wildlife Apiaries in Co Westmeath decided to build the Lego beehive for "a bit of craic" and his creation has since gone viral.

The beekeeper told the Westmeath Independent: "I had the idea before Covid-19, so when that happened I thought I would order a load of Lego and see what happens with it. I've been making it bit-by-bit over the last eight weeks or so."

The reaction has been huge. More than 100,000 people have viewed O'Leocháin's original video and he said that people in China, America, and other locations have been in touch to tell him they love the idea.

"To be honest, I wasn't expecting such a big reaction," he said.

Read more: Irish honey boasts of just as many health benefits as Manuka

He said that a number of people have asked him if he had design plans because they wanted to make their own Lego beehive. Unfortunately, O'Leocháin didn't use any plans to make the beehive and simply built the Lego beehive by eye beside a normal one to measure everything up.

He said that the Lego beehive now houses 30,000 native Irish black bees and will house up to 60,000 bees in the middle of summer.

O'Leocháin didn't use glue to make the beehive and said that the bees would actually seal any gaps in the structure themselves.

"What the bees will do, given enough time, is they will propolis the whole thing. Propolis is a kind of glue that the bees get from trees, and with any gaps in a beehive, with any wind or air getting through, they will basically put their 'glue' in between to seal it up."

O'Leocháin set up Athlone Wildlife Apiaries to generate and sell honey to fund his work as a wildlife rescue volunteer.

The Irish beekeeper is using his viral creation to help raise funds for wildlife rescue and rehab on GoFundMe.