Phoenix, Arizona couple, in their 60s, were enjoying a day on the Killarney jarveys, at the Gap of Dunloe, when their horse got spooked throwing them into a ravine. 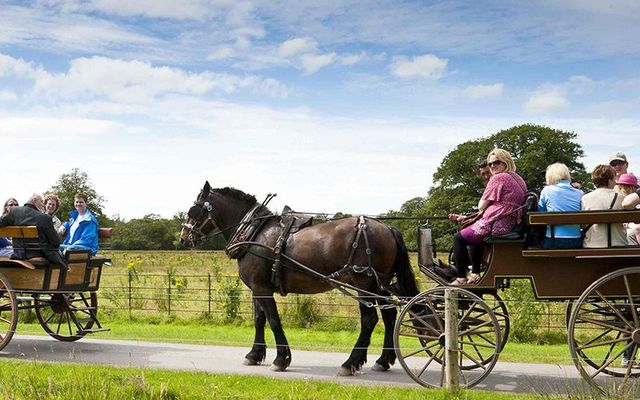 A Phoenix, Arizona couple, in their 60s, were enjoying a day on the Killarney jarveys, at the Gap of Dunloe, when their horse got spooked throwing them into a ravine.

The Arizonian couple, in their 60s, fell 12-feet into a rock-strewn area and the driver barely escaped serious injury.

Rosalyn Joy Few (64) and her partner Normand Larose were on vacation and enjoying a family day out in a traditional “jarveys” (horse and cart) with younger relatives when tragedy struck. The couple were of Irish extraction visiting their ancestral home.

They were traveling in the horse and carriage followed by family members including Few’s daughter, son-in-law and two grandchildren.

Gardai (police) are trying to establish the exact cause of the incident. A senior source told the Herald that initial indications show that the horse became startled and bolted. The occupants of the carriage were thrown from the carriage down steep terrain. They suffered catastrophic injuries.

Expert emergency services were deployed shortly after 2pm to the scene but Few and her partner were pronounced dead shortly after. Members of Kerry Mountain Rescue were called in to help to retrieve the bodies.

Few’s daughter and other family members were traveling in a separate carriage and came across the accident shortly after it happened. They  did not witness the incident.

The jarvey’s driver, a local Kerryman, in his 40s, and an experienced driver, escaped serious injury but sources say he is deeply shaken. The horse was badly injured and had to be put down.

The Gap of Dunloe, in Killarney, where tragedy struck.

A source told the Herald "The deceased are a couple from the US, and they were around 3km into their journey when the fatal incident occurred.

"They were with another group who came across the scene in the immediate aftermath.

"They are absolutely distraught, as you can imagine."

He told the Irish Sun “This is a very sad and tragic accident and it will be fully investigated to establish all the facts”.

According to reports the family had started out from Kate Kearney cottages, in Killarney, only three kilometers from where the accident took place.

Tragedy in the Gap of Dunloe. Garda Superintendent, Flor Murphy, says every help is being given to the family of two US tourists from Arizona who died in an accident involving the pony-and-trap they were travelling in. Says not clear yet why the horse and cart went off the road. pic.twitter.com/0jPf37JzQH

The Phoenix, Arizona couple’s bodies were transferred by hearse to Kerry General Hospital, in Tralee, shortly after 6pm on Monday evening. The Office of the State Pathologist is expected to carry out their post-mortems on Tuesday.

The Killarney Chamber of Tourism & Commerce expressed its sympathy and support the Arizona family. Chamber President Paul O'Neill said “We are all shocked and saddened by this most tragic accident.

"The Gap of Dunloe is one of Ireland's most popular tourist destinations, a place that brings joy to tourists the world over.

"We are devastated that a visit to it by this couple would end in such tragic circumstances.

"The people of Killarney extend our heartfelt sympathies to all affected by this tragedy and will do whatever we can to support the family during this very sad time."

The Mayor of Killarney, Niall Kelleher, said the tragic accident had caused "great shock and upset throughout the entire community.

"The Gap of Dunloe is one of the most naturally beautiful places in the entire country, but there is a dark cloud overhead this evening as everyone comes to terms with what happened.”

Book of Condolence opened by Mayor Niall Kelleher at Killarney Town Hall for victims of Jaunting Car crash at Gap of Dunloe. Rosalyn Few and Norman Larose both in their 60's from Phoenix Arizona were on a family holiday. Investigation in to cause of crash continues @3NewsIreland pic.twitter.com/qmAuMr8Yiu

This is the second recent death of an American tourist in the area. In May 2017 an American woman in her 60s was killed at the entrance of the road to the Gap of Dunloe when her bicycle collided with a jeep towing sheep.