A Las Vegas shooting survivor tells how she was pulled from the crowd by a young marine she met just two hours earlier. 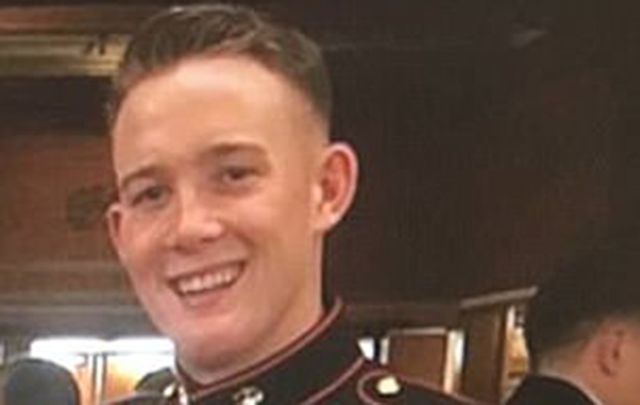 Marine Brendan Kelly is being hailed as a hero for his actions during the Las Vegas mass shooting. Facebook

Marine Brendan Kelly shielded Renee Cesario from the gunfire before pulling her to safety during the Route 91 Harvest Festival Las Vegas shooting.

An Irish American Marine is being highly praised for his heroic actions during the mass shooting at the Route 91 Harvest Festival in Las Vegas on Sunday night.

Marine Brendan Kelly, 21, was enjoying the music of Jason Aldean alongside 23-year-old Renee Cesario last weekend when Stephen Paddock opened fire on the crowd from two smashed-out windows on the 32nd floor of the Mandalay Bay hotel. Killing at least 58 people and injuring over 500, Paddock’s motive for the shooting is still unknown.

Although Kelly and Cesario had met just two hours previous, the young woman is commending his actions in ensuring she was protected from the gunfire and for bringing her to safety.

“Brendan and I met only two hours before the Jason Aldean show,” she wrote on Facebook.

“I left my friends so we could go up super close to the front for the end of the night. We were just dancing and having fun and then all of the sudden there were loud noises that sounded like fireworks, but no lights were going off.

“It stopped, and Jason Aldean kept playing but then the shots fired again and he ran off the stage. Before I knew what was going on, Brendan tackled me down to the ground and covered me from the fire,” Cesario continued, explaining the confusion in the initial moments of the tragedy.

“It stopped again and he looked around to see what was happening and then it just kept going. He looked at me and said 'We have to get out of here. We can't stay here. It's not safe.'

“Then he pulled my arm up to get me out of the piles of people. We had no idea who was dead or who was alive. We just started to run. He kept telling me it was going to be okay and to keep running until we were safe.”

Once in a safer location with Cesario still separated from her friends and family members, Kelly continued to look out for her welfare, staying with her through the night until she was reunited with her sister.

“He even let me use his phone to stay in touch with my sister so she knew I was safe, which is the text you'll see. The whole night he didn't leave my side,” she concluded.

While Kelly is yet to comment on his bravery, a friend spoke to CBS, branding the young marine an “American hero.”

“He's not that type of Marine...he doesn't seek attention, recognition, or fame. He does it because he's a genuinely good guy and American hero,” said friend and fellow marine Chance Wilk.