How do politicians and NRA leaders sleep at night? Are they ever stricken by a tiny voice of conscience? 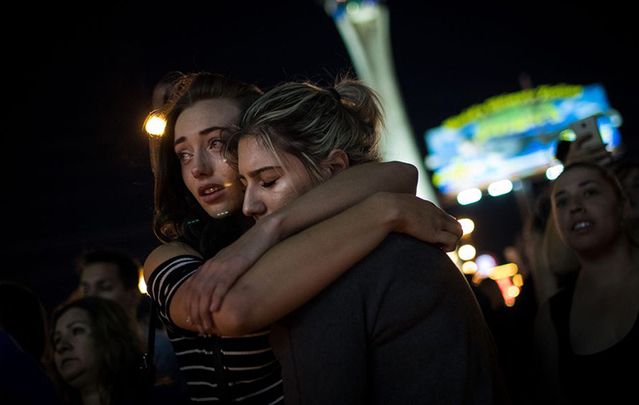 Survivors huddle in the wake of the murder of 59 people and shooting of over 100 others. Twitter / Cnet

What did we do to deserve the political climate we have today with its wicked divisions and rampant hatred?

The bodies in Las Vegas were barely cold when the air was thick with violent imagery and threats.

We wonder sometimes how the National Rifle Association (NRA) leaders and the politicians of both political parties sleep at night. They must know in their pursuit of fewer and powerless gun laws they have ensured many more slayings like Las Vegas.

It will go on and on the voices from the graves of children in Connecticut, police officers in Dallas, gay nightclubbers in Florida, and now from the massacre in Vegas, will hopefully resound in their ears.

Are they ever stricken by a tiny voice of conscience asking maybe the US should try the Australian experiment where they banned essentially all guns after a horrific mass slaying and mass shootings events went away?

This is the results after a conservative government took action following the worst gun massacre in Australia (1996)#guncontrol pic.twitter.com/ks5Lvl1owS

The other utter hypocrites are the members of Congress and the president who stood in hushed silence for a moment yesterday in recognition of the dead and the injured in Vegas.

In their back pocket, figuratively, was the last check from the NRA which allows them to control the vast number of supplicants in both parties.

That's right. There are lots of Democrats too who have corrupted their entire political careers by taking blood money.

It would be very interesting to see a presidential candidate who took on the NRA and made it a centerpiece of his or her campaign.

It is probably unlikely but the overwhelming number of polls show that ordinary Americans want better background checks on gun owners and normal screening and vetting procedures.

It could start a prairie fire, not by asking that all guns be banned, just that proper laws be put in place to make it much harder for deviants like the madman in Las Vegas who bought at least 42 guns to pop up on a “code red” somewhere.

“Investigators Find Arsenal Fit for a Commando Team,” screamed the Washington Post headline, an indictment of every gun law that has been weakened fatally, including the assault rifle ban and proper background checks that could ascertain how many guns a miscreant had bought.

He went out and did his worse on a group of Americans, Republicans and Democrats, country music lovers, men, women and children all enjoying a fun country and western concert.

Yeats wrote the “best lack all conviction, the worst are full of passionate intensity, the center cannot hold.” He was speaking of the incredible slaughter of the First World War.

Sure, have your Second Amendment rights but nowhere does it say you can lawfully kill with guns you buy. There is also a right not to be killed, to enjoy and live life as you see fit which includes going to a country and western concert with your family.

Now scores will never go back home, hundreds will be injured and traumatized and millions of us will wonder, 'Where next?' It could be your train station, your mall, your football game, your stroll in a park.

Meanwhile, the reptilian NRA and their political enablers will slide back into prominence once the upset and carnage fade. Until the next time the killing field happens again.

These Are the Faces and Stories of the Las Vegas Shooting Victims https://t.co/W2y2EMGpyM pic.twitter.com/ENXmT2WHdf