As long as the NRA holds America hostage, massacres will continue

You cannot fix what you will not face. We appear to have no intention of facing the reality that easy access to assault weapons and high-capacity magazines is tearing our nation apart. 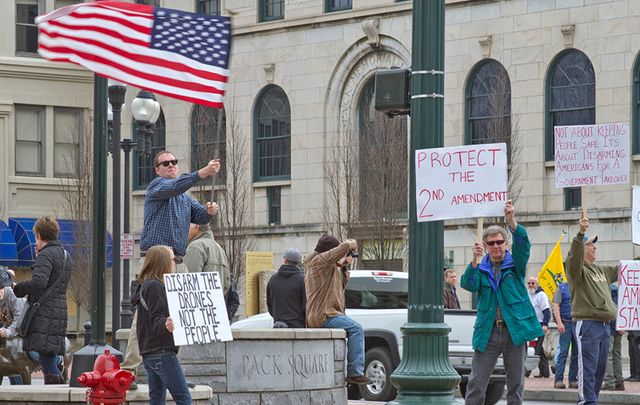 Las Vegas, Orlando, Dallas. “How many times must the cannonballs fly/before they're forever banned,” Bob Dylan sang in his classic “Blowing in the Wind."

How many times will we read that another gunman, acting alone, has amassed an arsenal of military grade weapons (with high capacity magazines)?

How many of these lunatics do we intend to keep enabling before we come to our senses and ask why any citizen actually needs an assault weapon with high capacity magazines at all?

The apocalypse is not imminent, we are not in the middle of a protracted war with Canada or Mexico, so the rationale for owning ten guns and rifles – as this Vegas maniac did – makes no sense.

Dem lawmaker: "There is blood on our hands" until Congress fights back against NRA https://t.co/7Nm83ErR9k pic.twitter.com/CSPM7oa9CM

Many things get lost when Americans talk about guns: perspective, tempers, civility, reason. No sooner do you ask these pointed questions than a small but persistent (and impressively deep-pocketed) sub-section of our society raise their voices and the rooftops shouting about their God or Constitution-given rights.

But what about the people being massacred? Don't they have rights too? Don't they have the right not to be shot, at least?The constitution does not grant absolute rights when it means committing criminal acts, that is something we do all by ourselves.

Vigils are held across the US for victims of Sunday's shooting in Las Vegas, which left at least 59 people dead https://t.co/PtPheoouPW pic.twitter.com/lDSTfp6tdZ

Take these weasel words, “guns don’t kill people, people kill people,” for example. Well, what kind of people are we?

We are consigning those going to their graves after Las Vegas to the wheel of history too quickly by insisting that our rights to high-capacity magazines and military-grade rifles are more important than their right to live.

The proof is conclusive. In America, our citizens are becoming gun death statistics at a rate that's dramatically higher than anywhere else in the developed world.

So many people die from gunfire here each year that the death toll between 1968 and 2011 eclipses every war that was ever fought by this country.

Increasingly, America's news cycle is a weekly – often daily – recitation of mass shootings and mayhem, and the numbers being shot are only rising, not falling.

We see that it's a crisis. We know that it's a crisis. Yet we look away and pretend it can never touch us. Statistically, though, it very easily could. There were an astounding 372 mass shootings in the US in 2015; the odds of you or someone you love wandering into one are only increasing.

The % of Crazy in the US is not likely higher than other countries but the gun deaths are. Access to guns = death. THAT is really my point pic.twitter.com/U3EW1arrRT

It's without end and without precedent, this ever-growing pyre of the American dead, their lives increasingly taken by military grade assault weapons with high-capacity magazines, in our endless destructive cycle of mass shootings.

No other country on Earth watches one mass shooter after the next mow down another group of unsuspecting innocents and decides that the solution is to buy even more guns or look away. Australia, for example, enacted tougher regulations after a mass shooting with a semi-automatic rifle in Port Arthur, Tasmania in 1996, and has not suffered a mass shooting since.

"Every penny will be put to use." GoFundMe started for Las Vegas victims has raised more than $2.5 million https://t.co/UOActEd1ea pic.twitter.com/PU3OjtrNfX

This American age should be called the Great Unraveling. It's as if all our fears – our utter failure to act on the most critical issues and injustices of our times – have prepared a bitter harvest for us.

Each attack on our fellow citizens is an attack on us all, after all. Each attack sows mistrust, tears further at our social contract, divides us from each other, spreads fear and kills hope.

Each shooting does violence to what we stand for and emboldens what we stand against. It's a spiraling tragedy of such scale and impact that it staggers the senses.

And this Great Unraveling is turning us into an internationally lamented basket case. Other nations measure our apparent decline by our inability to get even a moderate gun control bill through our house and senate.

More than half of the mass killers in 62 mass shootings over the last thirty years possessed high-capacity weapons that would be banned by Dianne Feinstein's Assault Weapons Ban of 2013 bill (which includes semi-automatic rifles, guns with military features, and handguns that use magazines with more than 10 rounds).

We don't enact it though. We don't even properly debate it. The NRA dictates to our Congress and Senate what action they may take, which is no action at all. Then our supplicant leaders do what they are told.

You cannot fix what you will not face. Those words are James Baldwin's and their enduring challenge should shame us. We appear to have no intention of facing the reality that easy access to assault weapons and high-capacity magazines are increasingly tearing our nation apart.

Since 1997 at least six billion dollars worth of military hardware has been transferred to more than 8,000 law enforcement agencies who are enrolled in the program. Yet they have not prevented one mass killing

After Connecticut and the little children, we thought never again, people will finally come to their senses only they didn't. We live in an NRA-controlled country and Las Vegas just proved it.