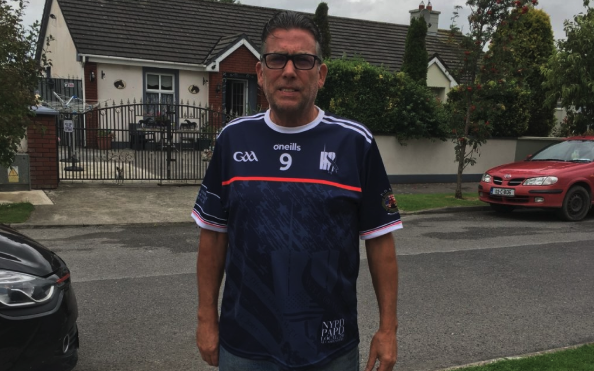 Michael Burke, a New Yorker and Ground Zero volunteer who has links to County Sligo, has teamed up with the GAA and is touring Ireland to commemorate those who died on September 11, 2001 and raise money for local Irish charities.

Michael Burke volunteered following the 9/11 terrorist attack on the World Trade Center to help with the cleanup and rescue at Ground Zero. Nineteen years later he is touring around Ireland distributing 9/11 GAA jerseys to current and former players while raising money for local Irish charities, all with the aim of commemorating the deaths of the 2,977 killed on Sept 11, 2001.

Born in The Bronx, New York, Burke has strong familial links to Tubbercurry, in County Sligo, and now lives in Castleisland, in County Kerry. Burke was a close friend of Sligo native Kieran Gorman who was killed on 9/11. A carpenter by trade, Burke told the Irish Independent how he was moved to volunteer to help with the rescue and clean up following the attacks.

This week, as Burke distributes the specially-commissioned 9/11 GAA jerseys to players around Ireland he hopes that the players can then raise funds for charities of their choice. Each jersey will be auctioned with proceeds going to a local charity.

His trip from Kerry will take him through a number of counties including Sligo. He will finish his journey in Charlestown,  County Mayo, the town his own mother hails from.

The 9/11 GAA jersey was specially designed and donated to Burke by O'Neill's. They feature silhouettes of the World Trade Center and an American flag. They also pay homage to the New York Police Department and the Port Authority of New York and New Jersey Police Department.

Paying respect to those who lost their lives on 9/11 a flag-raising memorial will take place on Friday (Sept 11) at the O'Neill's offices in Strabane, in County Tyrone.

As Burke travels around Ireland he is also collecting signatures which he will donate to the children's hospice charity, LauraLynn.

O’Neills Managing Director, Kieran Kennedy said in a statement "None of us can ever forget the scenes of devastation in New York and Washington, D.C. on September 11th, 2001. The attacks had a profound and far-reaching impact on all of us, but none more so than those brave rescue teams and volunteers including Michael Burke.

“The bond between the Irish and New York is deep, particularly through the GAA, which Michael was so involved in there, so we thought it was fitting that an O’Neill’s jersey should commemorate the 19th anniversary this year."

Read more: 9/11 and how a poster of a beautiful missing Irish woman stunned me