Why September 11 will never be forgotten

343 firefighters lost their lives on 9/11. "To this day and always, it is a ghost of a number. A specter. And a benediction." 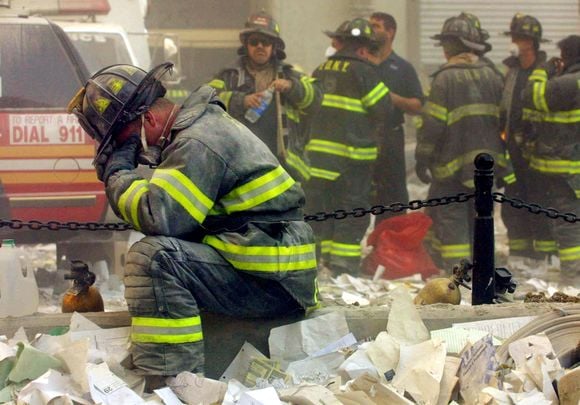 From a family of firefighters, IrishCentral contributor Kathleen Donohoe remembers 9/11 the shock, pain, and how she memorialized her heroes.

The firehouse smells like smoke. Distinct, vaguely pleasant, the scent wafts from the row of turnout coats that hang on hooks in the lockers lining the wall beside the truck.

Ladder 156 is on 14th Street in Brooklyn, New York. It’s quartered with Engine 276 and the company nickname is The Highway, after Kings Highway. It’s not as colorful as, say, The Nut House or The Red Hook Raiders, but it suffices.

My paternal grandparents both left Galway in the mid-1920s. They met in Crown Heights, Brooklyn, and had five children; a daughter and four sons, all of whom joined the F.D.N.Y. My father is the youngest, the last to go on the job. He was sworn in by Mayor Beame but now Koch is in office.

It’s 1981, I’m nine, and my father has been at this firehouse for several years. His first permanent firehouse was Ladder 2 in midtown Manhattan. Tourists in the neighborhood to see Rockefeller Center used to pop in and ask to take pictures.

The red door of the firehouse is open to the warm summer morning. The guys are standing around talking, both those who are working and those who are going on the first-ever Ladder 156 camping trip. It’s dads and kids only, no mothers allowed. There are three siblings though, two girls and their brother, who are being chaperoned by their father’s best friend.

We’re restless, darting in and out of the firehouse. Somebody's late and we can't leave yet.  A line of kids waits to be lifted up the firepole so they can slide halfway down. They aren’t allowed upstairs to leap through the hole in the floor and take it from the top because only firefighters can go up to the sleeping quarters. And the danger (maybe).

Then finally, we’re off, heading upstate to the wilderness. Real wilderness, not just the wide, pretty lawns of Long Island.

At the campsite, each family stakes out a spot and soon we are a village of tents. The boys stay with the boys and the girls with the girls. My two sisters and I become friends with the two sisters who are with their father’s friend. The older girl sometimes speaks of their dad, who died in 1978 along with five other firefighters when the roof of a burning supermarket collapsed beneath them. Each time, she begins the same way, “My father, when he was alive, he…”

The first night around the campfire, the guys tell us there is an escaped ax murderer loose in the woods. The almost-teenagers roll their eyes but the little kids are terrified. I’m not sure what to believe. Still, I reassure my sister, who is crying. “They’re full of it,” I say. “You know how they are.”

What they are is incredibly convincing. There are periodic ‘updates’ from some unseen radio and very serious debate. Should we pack up and leave? Then a figure with a dark blanket over his head dashes through the woods nearby, howling and after the initial screams, the shouts go up. "That’s Joe! It’s Joe!"

Joe Murphy is a quiet man. A bachelor, he has brought his nephew on the trip. He plays the bagpipes in the F.D.N.Y. Emerald Society Band and every St. Patrick’s Day, he marches in the parade, and every year, we spot him on television. "It’s Joe! There’s Joe!"

The second night, a war breaks out between the boys and the girls. Our dads are hanging out around the campfire while we spy, plot and ambush, shout and shriek. A park ranger comes by. There have been complaints, he says tiredly. Keep it down. After that, we are quieter, though unrepentant. On the third morning, as we are leaving, there is already talk of next year, the way cousins might look forward to another family reunion.

Ladder 156 did go camping again and again and again. Together, the trips form a collective memory, like the company picnics and the Christmas parties, where Santa arrives perched on top the fire truck, a hint of five o’clock shadow showing beneath his beard.

We never sensed what was coming, though it seems that we should have, the way you might an earthquake or a storm. Yet while hiking through the woods of upstate New York, far away from the din of Flatbush, nobody paused and asked, alarmed, did you hear that? A rumble from a blue Tuesday morning in the far-off future, almost like thunder, but really, the first fatally damaged building beginning to fall.

On the morning of September 12, 2001, in one motion, I grabbed the remote control and jumped out of bed. I had just moved to Southampton, NY to attend the MFA in Writing program at Southampton College of Long Island University. September 11 had been my first day of class.

Frantically, I hit a button and the television came on like a scream. A woman reporter I didn’t recognize was sitting at the desk, speaking rapidly.

There are certain things you know if you’re from a fire-family:

A child wearing a firefighter’s turnout coat can barely lift her arms. She feels like a knight looks.

The worst day in the history of the department came in October 1966, at the 23rd Street Fire. Twelve firefighters were killed when a floor collapsed.

The worst in Brooklyn was Waldbaums in 1978. That time it was the roof. Six firefighters were killed.

“--is reporting that over 300 firefighters are missing.”

I dropped to my knees as though someone struck me with a baseball bat. Blindly, I began to crawl across the carpet. Run, I thought. Oh my God, run.

For 19 years now, the arrival of September in New York has not meant Labor Day weekend, or back-to-school and off-to-college sales, or the slow cooling of late summer days. It’s September when the towers appear again in lower Manhattan, opaque, weightless, even taller than they were. In death, they have acquired a kind of grace.

My uncles had retired by 2001. Neither my father nor my cousin was working that morning, though my cousin did the night tour on Monday. He’d told his father, a retired FDNY lieutenant, that he might work overtime on Tuesday so he could take the day off to go surfing on Saturday. It was 3 am on September 12 before his sister got his name off a list of survivors from a family helpline. That morning, he’d been on his way home to Long Island when he heard the news on the radio. He'd turned right around and headed back to Brooklyn. His firehouse lost six men. Had he been working, he would have been one of them. And so our family was spared by luck and by the era in which the attacks occurred.

In the immediate aftermath, as a writer, the very idea of fictionalizing the day was unthinkable. Indeed, attempting to write at all seemed meaningless.

But then a few months after the attacks, I was watching Tom Brokaw being interviewed. He was asked about the propriety of creating art centered around September 11. It would happen eventually, he answered. Look at Pearl Harbor. These same questions were asked in 1941. As I listened to this, I had a thought that still puzzles me today, if only for its clarity. It was this: nobody’s going to write about us.  Us: fire-families.

Of course, I knew that there had to be many writers, both established and unpublished (as I was) who could do so, and beautifully. But it was nobody will, not nobody can. I wasn’t thinking of television or the movies, but specifically the novel. Books will be about people who were not supposed to be there that morning but were. They will be about those who had jobs that were not supposed to be dangerous. Jobs where they fully expected to be alive at the end of each day.

Nobody will write a novel about us. Then I thought, I will.

It took fifteen years. "Ashes of Fiery Weather" came out in August of 2016. It is about the women of a Brooklyn, New York, a family of firefighters whose story begins in Ireland.

Though no novel can ever ease the grief for the lost, I believe it can honor them. Storytelling can reach beyond the historical record by creating voices that, often, are not the ones overtly present in that record. Fiction can move beyond the moment of loss to show a life long before, and long after.

In the weeks after the attacks, the number of firefighters lost rose and fell from 300, fell and rose, before finally stopping at 343. To this day and always, it is a ghost of a number. A specter. And a benediction.