The discovery of the Omicron variant is triggering new travel restrictions in Ireland, where restrictions had already begun to tighten in recent weeks. 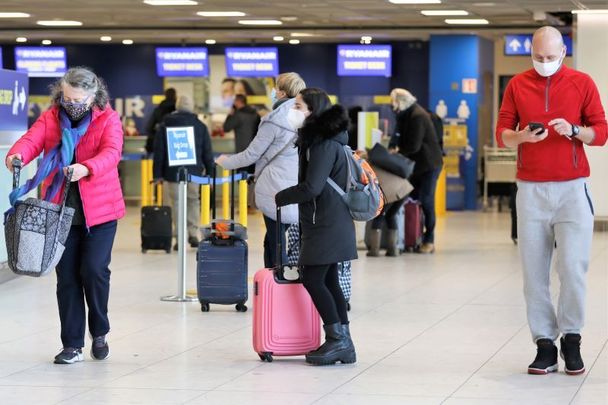 About 200 Irish citizens sought consular assistance from the embassy in South Africa over the weekend and early this week in an attempt to secure a flight home, the Department of Foreign Affairs confirmed.

The plea for flight assistance came amid huge travel disruptions to and from Africa after the discovery of the new Covid-19 variant Omicron last week.

There are no direct flights from southern Africa to Ireland so passengers traveling from the region must stopover in London or another country.

Eleven possible Omicron cases were identified in Ireland on Monday, just four days after scientists in South Africa confirmed the new variant had been detected.

From Friday, December 3, all arrivals into Ireland, whether vaccinated or not, will need a clear Covid test result – a PCR test will allow for travel within 72 hours, and an antigen test is good for 48 hours. But this plan was met with criticism by UCD virologist Dr. Gerald Barry.

“Using a once off antigen tests like this to stop SARS-CoV-2 coming into Ireland, is scientifically unsound, and whoever came up with it should have a serious look at themselves,” he said on Twitter. “I am actually embarrassed for whoever thought this would be a good idea.

“PCR is better in this circumstance, but 72 hours is too long. Shorten that and require it on the other side too. Consider false negatives as well as the chance of infection in the interim. Has nothing been learned?? This is all just fluff to look like something is being done.”

Using a once off antigen tests like this to stop SARS-CoV-2 coming into Ireland, is scientifically unsound, and whoever came up with it should have a serious look at themselves. I am actually embarrassed for whoever thought this would be a good idea.

Furthermore, legislation allowing for the re-introduction of mandatory hotel quarantine for those who do not provide a certified negative test will be discussed on Thursday.

Hotel quarantine was a requirement for some travelers entering Ireland, but it stopped being operational on September 25.

The Department of Transport is also in talks with airline and ferry companies to ensure checks of negative tests take place before people board flights and boats to the country.

Also, in a bid to shift the burden of driving down the Covid rate on to parents, ministers decided in Cabinet on Tuesday to reduce socializing among children. Playdates for children will still be an option, or a day out to the panto, but not both in one week.

Effectively, this means either a visit to Santa in the stores or a trip to the panto, but not both.

There will be mask-wearing in schools from the age of nine upwards.

Taoiseach Micheál Martin said on Tuesday that there has been some improvement in Covid case numbers, although it was from an already high level and continued vigilance was important.

In other Covid-related news, 500,000 Covid-19 Johnson & Johnson vaccines donated by Ireland arrived in Nigeria. The vaccines were donated by Ireland through COVAX, a global initiative aimed at providing equal access to vaccines for all countries in the world.

"Following Ireland’s recent direct donation of over 300,000 vaccines to Uganda, I welcome the first deliveries of vaccine doses donated through the COVAX process,” he said.

"This significant donation of 500,000 vaccines to Nigeria represents Ireland’s continued commitment to universal access to Covid-19 vaccines and their fair and equitable distribution as we work together to bring this global pandemic under control."

Some details here on the arrival of a donation of 500,000 vaccines from Ireland to Nigeria. Follows a recent donation of 300,000 to Uganda. https://t.co/iCUgrZNmg9