US President Joe Biden has also announced that the US will restrict entry to travelers from eight different southern African countries over concerns about the new COVID-19 variant. 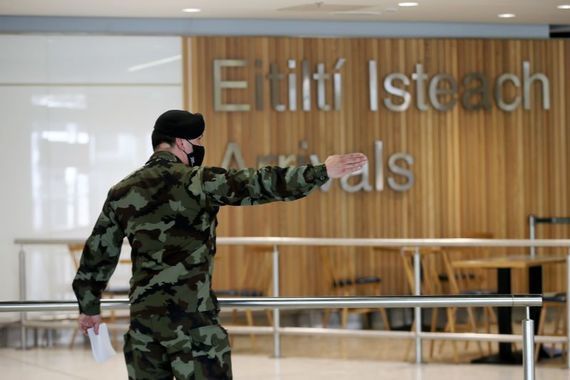 Irish residents returning home from seven countries in southern Africa will have to undergo PCR tests and 10 days of strict home quarantine due to concerns over a new COVID-19 variant.

The World Health Organization declared the new coronavirus strain a "variant of concern" on Friday evening, renaming it as the Omicron variant.

Minister for Health Stephen Donnelly advised Irish people not to travel to the seven southern African countries unless it is "absolutely necessary", while he urged any Irish resident currently visiting the region to leave as soon as possible.

He said that mandatory hotel quarantine will be legalized next week for residents returning from any of the seven countries.

The Department of Justice is also amending visa requirements for all seven countries.

Ireland will align with the EU's recommendation to apply the "emergency brake" and discourage travel to and from all seven countries. All 27 EU member states have imposed temporary travel restrictions on passengers from the seven countries over fears of the new variant.

There are no direct flights from any of the seven countries to Ireland.

Donnelly told RTÉ News that he was "concerned" over initial reports of the new variant, which described it as highly transmissible.

"We’ve seen in South Africa that it has outperformed and taken over from Delta," Donnelly told RTÉ News.

"One of the big questions the scientific community are looking at now is do the vaccines have any different effects? In other words, can it escape vaccines? We don’t know that yet."

Kingston Mills, an immunology professor at Trinity College Dublin, told the Sunday Times that it is too early to determine whether the Omicron variant would evade existing vaccines.

However, he added that the new variant was in a "better position" to do so than all other strains of the virus because of the number of mutations.

"It has 30 mutations in the spike protein," he told the Sunday Times. "That’s more than any previous variant that has been identified and these mutations include the mutations that were in the beta variant, which was the original South African variant.

"The problem with this virus is it has those mutations but it also has the mutations that make the delta variant more transmissible."

Meanwhile, US President Joe Biden has announced that the US will restrict entry to travelers from eight different southern African countries over concerns about the new variant.

The measures, which come into effect on Monday, do not apply to US citizens or permanent residents and will not result in a total ban on flights.

The restrictions will also apply to travelers from Malawi in addition to the seven countries listed by the Irish Government.

The UK has added South Africa, Namibia, Lesotho, Botswana, Eswatini, and Zimbabwe to its red list, and also suspended all flights from the six countries from midday on Friday.

Any passengers arriving into the UK from any of those six countries will be required to book and pay for a government-approved hotel and quarantine there for 10 days while waiting for two PCR tests.

The measures will come into effect from 4 a.m. on Sunday and will also apply to Irish and British residents.

British Health Secretary Sajid Javid said that it is highly likely that the Omicron variant had already spread to other countries and said that it may pose a "substantial risk to public health".

The South African Government has condemned moves by the EU to impose travel restrictions on southern African, stating that the measures are "unjustified".

South African Health Minister Joe Phaahla said on Friday that some European leaders were using the southern African countries as "scapegoats" and added that the measures were "draconian".

The WHO advised against implementing travel bans on Friday, stating that it was too early to determine whether the new variant was more transmissible or virulent.