Irish deputy leader said that Ireland was going to "act quickly" against the new variant. 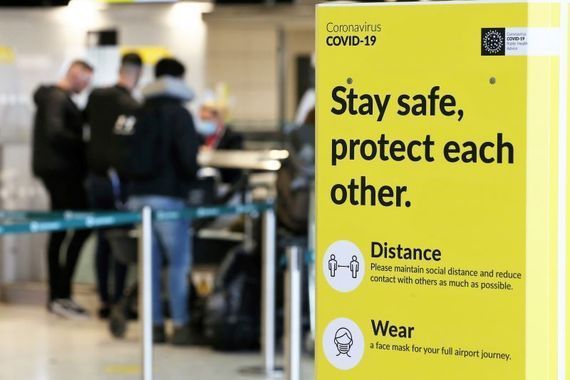 The European Union has proposed a ban on air travel from southern Africa due to fears over a new COVID-19 variant.

In a tweet on Friday morning, EU Commission President Ursula von der Leyen proposed activating "the emergency brake" to halt travel from the region to deal with the "variant of concern".

"All air travel to these countries should be suspended until we have a clear understanding about the danger posed by this new variant," von der Leyen said in a statement on Friday.

The @EU_Commission will propose, in close coordination with Member States, to activate the emergency brake to stop air travel from the southern African region due to the variant of concern B.1.1.529.

Tanáiste Leo Varadkar said that Ireland was going to "act quickly" against the new variant, adding that Ireland and the UK were slow to act against the Delta variant last year. He said that an announcement on travel restrictions would be made later on Friday.

The UK has also banned flights from South Africa and neighboring countries over fears of the new variant.

On Friday afternoon, Belgium reported one case of the new variant, known as B.1.1529, in a person who traveled to the country from abroad.

The threat of a new COVID-19 variant comes at a time when several EU member states are battling a significant spike of COVID-19 infections. The Netherlands has imposed a partial lockdown due to rising infections, while Austria has reimposed a full national lockdown to help curb the spread of infection.

The Irish Government has also reintroduced certain measures to help slow the spread of the virus.

The World Health Organization (WHO) said that it will take several weeks to fully understand the impact of the new variant.

The WHO is expected to officially name the variant on Friday and will announce whether it is a variant of concern or a variant of interest.

Fewer than 100 cases of the variant have been reported, with most cases diagnosed in South Africa. However, there have also been cases in Israel, Hong Kong, Belgium, and Botswana.

Most of the cases have been reported in the South African province of Gauteng, of which Johannesburg is the capital city.

Only 24% of South Africans have been fully vaccinated against the coronavirus, leading to concerns among experts that the new B.1.1529 variant could spread rapidly through the country.

Scientists say that the variant has the most mutations of any strain of the virus to date and are trying to determine whether it is more transmissible and resistant to the COVID-19 vaccine.

German biotech company BioNTech, which developed a COVID-19 vaccine with Pfizer, is currently studying the new variant and how it interacts with the vaccine. It expects to have data on the Pfizer vaccine's efficacy against the variant within two weeks.