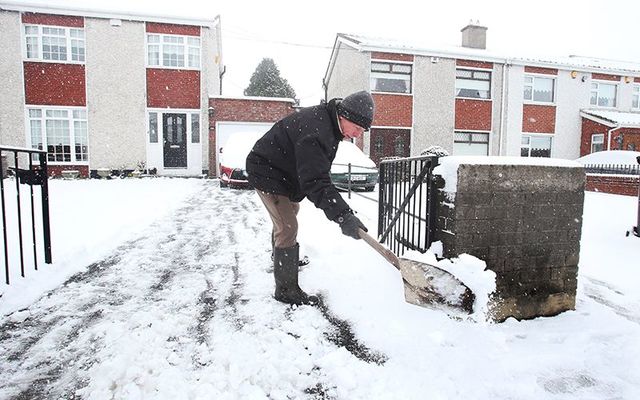 Irish public urged to stay indoors as Storm Emma and Beast from the East collide. RollingNews

Ireland’s National Emergency Coordination Committee has asked the public in the regions of Munster and Leinster to remain indoors from 4pm on Thursday and to stay there until midday on Friday as significant snow drifts are predicted.

Schools and third-level educational institutions will close across the provinces of Munster and Leinster. Bus Éireann, Iarnród Éireann train services and Dublin Bus services have also been cancelled. There will be only limited Luas (tram) and DART services.

Met Éireann’s latest weather warning came after 6.2 inches of snow fell in the east and south of the country over Tuesday night. Further snow is expected and up to 10 inches is predicted by midday on Thursday.

#Coommunity The National Emergency Coordination Committee has asked everybody in Munster and Leinster to be indoors by 4pm tomorrow and to stay there until midday on Friday. #StaySafe #StormEmma #TheBeastFromTheEast pic.twitter.com/NuGdbqeKdP

The weather will worsen when Storm Emma, from the south, meets with the Siberian front, nicknamed “The Beast from the East”. This will bring blizzards, gales and sleet.

The red weather warning officially means “Extreme weather is expected. Red means you should take action now to keep yourself and others safe from the impact of the weather. Widespread damage, travel and power disruption and risk to life is likely. You must avoid dangerous areas and follow the advice of the emergency services and local authorities.”

Taoiseach (Prime Minister) Leo Varadkar told the Irish Parliament on Wednesday that the Defense Forces are on standby to help out during the snow storm on the request of local authorities. Varadkar said the safety of people must come first.