Snow and freezing temperatures begin to cause havoc as serious weather warning for the east remains in affect through Thursday. 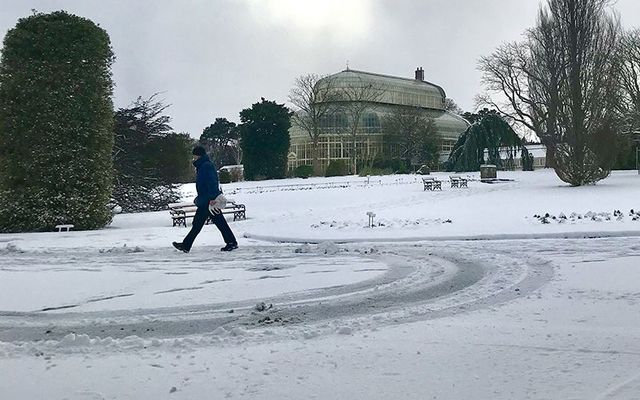 Snow fall at the National Botanic Gardens in Dublin. RollingNews

Snow and freezing temperatures begin to cause havoc as serious weather warning for the east remains in affect through Thursday.

Ireland’s meteorological services have issued a status red weather warning for counties Dublin, Louth, Meath, and Wicklow after 6.2 inches (16cm) of snow fell over Tuesday night as Storm Emma from the south and a Siberian blast nicknamed “The Beast from the East” arrive to the island’s shores.

This serious weather alert will remain until midday on Thursday. Up to 10 inches of snow and heavy snow drifts are expected.

Taoiseach (Prime Minister) Leo Varadkar told the Irish public to avoid unnecessary journeys and stay tuned to the media for updates. He told Newtalk radio that the Irish army are on standby to aid the public if there is any threat to food security.

The culmination of Storm Emma and the Beast from the East is predicted to bring the worst winter storm seen in Ireland since 1982.

Here's the last few snow showers that passed over our station at Roches Point. pic.twitter.com/ygfIfwvtGv

On Wednesday morning many schools across Ireland announced their closure and employers were advised to allow their employees to remain at home as snow continues to fall and temperatures remain, largely, below freezing.

Transportation across the country has also been heavily affected.

Dublin Airport has resumed operations having cancelled earlier flights. The snow has been cleared from the runways and taxiway for now. Cork Airport remains open and teams are working on treating the runway and approach roads.

The Gardai (police) have said that roads remain open in the east, but the conditions are poor. Public transport has been severely affected with Dublin Bus and the Luas (light tram system) suffering significant disruptions.

Bus Éireann, which services the wider country, is reporting major disruption in the east. School transport services are not operating in the red alert areas. They have also cancelled all services from Dublin to Athlone and Galway.

Iarnród Éireann, Ireland’s train operator, says all trains are operating at present, however there are some delays.

Best of luck and thank you to our crews who’ll be out around the network working to keep lines open and trains moving - out in all weathers, year round 👏👏 #BeastFromTheEast pic.twitter.com/P3BOP4W8Lt

The National Emergency Coordination Committee is due to meet again on Wednesday morning to discuss the deteriorating weather.