Watch Storm Emma, bringing the worst snowstorm in 36 years and temperatures as low as 14F, live on radar 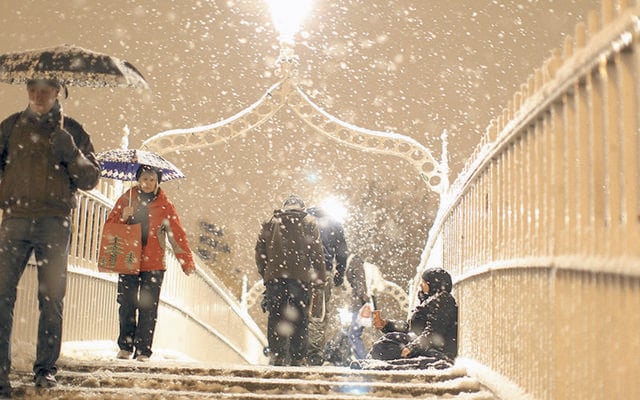 The "Big Freeze" of 2010: Ireland braces itself for the worst snow storm in 36 years. RollingNews

Watch Storm Emma, bringing the worst snow storm in 36 years and temperatures as low as 14F, live on radar

Storm Emma, dubbed “The Beast from the East”, fast approaching Ireland is set to bring the heaviest snowfall seen on the island in 36 years, with temperature dropping a low as 14F (-10C). You can watch the storm’s progress below with Windy.com’s live radar.

The Siberian blast has already hit mainland Europe, with France, Belgium and Germany experiencing temperature lows of 3.2F (-16C). The storm, driven to Ireland from the frigid north of Scandinavia and Russia, will bring snowfalls from 4 inches and drifts up to a meter deep.

Ireland’s meteorological center, Met Eireann, predict the worst of the storm will hit Ireland over Wednesday, Thursday and Friday. They are likely to issue a “Status Red” snow-ice alert.

The incoming storm is predicted to be the worst snow storm seen in Ireland since 1982 when 9.8 inches to 6.5 feet of snow fell across the country and about 100,000 homes and businesses were plunged into darkness. In 2010 Ireland also suffered a “Big Freeze”, which included a 10.6-inch snowfall on Christmas Day and the coldest winter on record since 1962/63.

Storm Emma is predicted to wreak as much havoc on the country. Watch Windy.com’s live radar below.

Currently there is a Status Orange Snow-Ice warning in seven counties - Dublin, Carlow, Kilare, Laois, Louth, Wicklow and Meath. It is likely that a “red alert” will be in operation across the country by Wednesday.

“Air and ground temperatures will be 5 to 10 degrees [Celsius] below normal, with significant wind chill and penetrating severe frosts.

“A spell of persistent and heavy snow is expected to extend from the south late Thursday and Thursday night, with significant and disruptive accumulations.”

Forecaster Evelyn Cusack told Newstalk Breakfast that counties in the east and south of Ireland will be under a "blanket of snow" by Thursday.

"Thursday will be the worst day, and it's not going to be a nice weekend either. I don't want to discount the showers tonight and tomorrow. We're worried about the winds, and there is also the possibility of thunder and lightning with Storm Emma,” said Cusack.

"Overall, the west and northwest will fair best. The east and south, they will more than likely be a blanket of snow by Thursday."

'Beast from the East': Watch LIVE and track the predicted path of Storm Emma across Ireland See the latest weather updates on Independent.ie: http://indo.ie/7Nxj30iDtrU

Ireland is bracing for transport chaos, school closures, and disruption to supermarket supplies.

Dublin Airport will have more than 100 machines dedicated to de-icing and clearing snow. However Irish government sources told the Irish Independent that there is a “strong chance” flights will be grounded at some point this week.

Widespread school closures are expected on Thursday and Friday as over 116,000 children would not make it to school due to transport disruption.