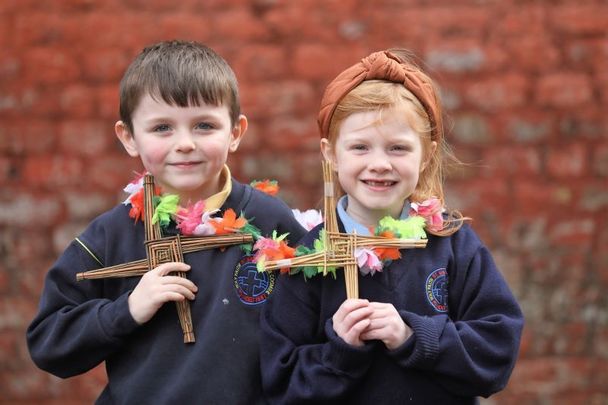 February 1, 2022: Schoolchildren in Dublin celebrating St. Brigid's Day. From 2023, the first Monday in February will be a bank holiday in observance of Brigid's Day and Imbolg. RollingNews.ie

March 18 will be a once-off bank holiday for a "Day of Remembrance and Recognition" in Ireland this year, while from 2023, the first Monday in February will be a new permanent bank holiday marking St. Brigid's Day and Imbolg.

“As well as that, we’re having a one-off, special public holiday this year that will be held on Friday, the 18th of March, and it’s going to be a day of recognition and remembrance - remembering those who lost their lives because of COVID, and also recognizing all of the workers and volunteers who did so much to help us get through the pandemic.”

Happy first Monday in February everyone. From next year, this day will be a new public holiday #LáFhéileBríde pic.twitter.com/0oDQOPFofk

In January, when the new public holidays in Ireland were announced, Varadkar said: “A once-off public holiday, a Day of Remembrance and Recognition, will be held in memory of the more than 9,000 people who have died on the island of Ireland with COVID. This will be held on Friday, 18 March and means we will have a four-day weekend because 17 March, St Patrick’s Day, is also a public holiday.

"It will also recognize, and say thank you, to the volunteers, the Irish people, and to all the workers who gave their all in the fight against COVID. We decided to make this decision now on a public holiday, rather than wait until the pandemic is over because so many have already given so much. It also roughly marks the second anniversary of the beginning of the pandemic in Ireland."

The once-off bank holiday this year on March 18 comes in addition to "a special, once-off tax-free payment of €1,000" to frontline healthcare workers.

Varadkar added: “From next year, Ireland will have an extra public holiday at the start of February to mark Imbolc/St Brigid’s day. It will be observed on the first Monday of February except where the 1st of February falls on a Friday in which case it will be observed on that day. This will be the first Irish public holiday named after a woman. It marks the halfway point between the winter solstice and the equinox, the beginning of spring, and the Celtic New Year.

"The creation of a tenth public holiday will bring Ireland more into line with the European average and it is one of five new workers’ rights that I am establishing this year. The others are the right to statutory sick pay, the right to request remote working, new rights around redundancy for people laid off during the pandemic, and better protection of workplace tips.”