Ireland will celebrate St. Brigid with a brand-new bank holiday, while the Association of Irish and Celtic Festivals in the US is hosting a St. Brigid's Day live stream concert. 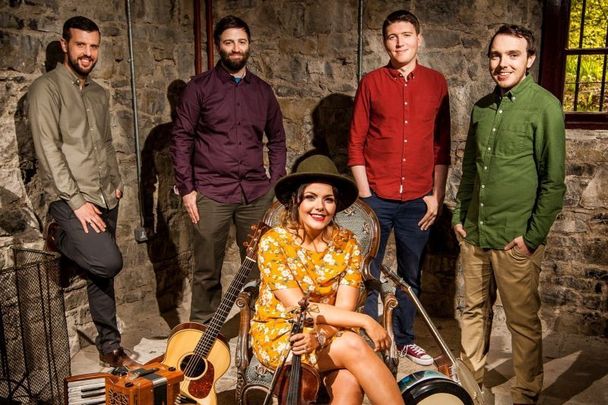 Goitse is part of the line up for the Association of Irish and Celtic Festival's St. Brigid's Day live stream concert. Irish Voice

I don't think any country celebrates bank holidays more than the Irish, and whether you want to ascribe more miracles to their patron saints, Patrick and Brigid, two more of them have cropped up for this year and 2023.

The Irish government has declared a new “once-off” day this year for March 18, a Friday after the national holiday on Thursday, March 17 which will result in a four-day weekend bonus for many people across the land.  The extra day this year called “A Day of Remembrance and Recognition” will mark the nation's perseverance through the dark days of the pandemic that yielded over 9,000 victims lost due to Covid-19 in Ireland while also releasing the pent-up demand to get out and about and closer to normalcy.

One can imagine the sorely suppressed hospitality trade looking forward to a huge weekend that might produce record-breaking numbers that could presage revisiting the initiative in future years when the March 17 holy day turned holiday breaks around the weekend.

And if you have been paying attention in recent years, you have observed the rising acknowledgment of the works of St. Brigid (or the Goddess Brigid if that is your creed from an earlier time) and seeking to elevate her status in Ireland along with the importance of Irish women across their society.

Now the Irish government has made it official beginning in 2023 with the first Monday in February (February 6) being a new bank holiday celebrated after the accustomed February 1 day also marking the arrival of spring in Ireland.

This February 1 will once again be an opportunity to mark the special role women play in the Irish music sphere for a virtual concert online organized and sponsored for the second year in a row by the Irish Embassy under Ambassador Daniel Mulhall and the Association of Irish and Celtic Festivals (ACIF).

The show will again be co-hosted by the two grande dames of Irish music, Joanie Madden and Eileen Ivers, who grew up together in Woodlawn and started their successful careers in that first golden age of Irish American musicians taking up the music in the 1970s.

The cooperative link by the Irish Embassy with the network of organizers who host many of the major festivals around the U.S. and Canada proved notable during the pandemic when restrictions held back such important and trend-setting cultural events to the detriment of local communities and the numerous artists who relied on them for employment.  The concert next week endeavors to keep that dual mission in front of the potential audience who can watch the February 1 performances contributed by several well-known and up-and-coming talents in the scene who have appeared at various festivals over the years past or would like to do so.

For example, the Irish quintet known as Goitse (meaning new or “fresh”) first showcased themselves to an ACIF conference in 2010 at the University of Limerick’s new state-of-the-art home for its Irish World Music and Dance Academy where they all met as students.  They literally struck paydirt there as collectively festivals across the U.S. recognized their multiple talents and youthful exuberance and a number of tours ensued over the years not only during festival seasons but at other times like their upcoming St. Patrick’s seasonal tour.

They will join Aoife Scott and Ashley Davis, two other artists fronting their own bands, across the festival circuit in the Brigid’s Day videocast.

These festivals also pride themselves on discovering new talent abroad and around the U.S. to present every year, and that will be part of the program too as Dani Larkin, Clare Sands, The BowTides, and Susan O’Neill are all slated to appear along with other guests not announced at deadline.

Also scheduled to appear is Cathie Ryan, the Detroit native who first came to national attention with Cherish the Ladies over three decades ago before forging her own solo career.  She moved to Ireland years ago and it was great to see her last summer at the Milwaukee Irish Fest and also as the lead singer on the Cherish the Ladies Christmas tour last month.

In those live shows, Cathie had a marvelous compilation CD available that in earlier times when CD sales were a thing would have been accurately marketed as Cathie Ryan’s Greatest Hits. Nowadays even when live shows and touring were possible, CD sales are negligible so production costs prohibit greater distribution efforts, but if you can get a copy of The Harvest: 25 Years of Song from one of the great Irish singers around, you will savor it.  You can always inquire online here.

The Brigid’s day concert will be on the ACIF YouTube channel on February 1 at 8 p.m. and will most likely be viewable there on-demand afterward if past practice is observed. More info can be had at IrishCelticFestivals.org.