Official launch of petition for St. Brigid’s Day to be a public holiday in Ireland

An Irish feminist group has launched a petition to make St Brigid's Day a national holiday following the government’s statement that a new public holiday will be announced. 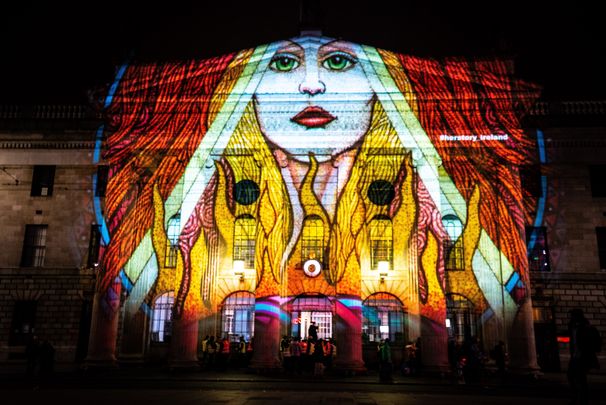 HerStory lighting up Dublin in a celebration of St. Brigid's Day Herstory

An Irish women's group is campaigning for St Brigid's Day to be recognized as a national holiday.

Following the government’s statement that a new public holiday will be announced on the 12th of October, an Irish feminist group called Herstory has launched a petition calling for St Brigid's Day to be celebrated as a holiday in Ireland.

Ireland currently has just nine Bank Holidays as opposed to 12 in many other European countries. The new bank holiday would commemorate those lives lost due to Covid and also celebrate the frontline workers.

To date, 11,331 people have signed the petition and the campaign has been backed by the Women’s Caucus, Green Party, Official St. Patrick’s Festival, Irish singer Imelda May, and political figures, Ivana Back, Josepha Madigan, Roisin Garvey and Holly Cairns.

Here are some of the reasons outlined by Herstory on why they believe Brigid’s Day should become Ireland's new bank holiday:

- February 1 was the ancient Celtic Festival celebrating the beginning of Spring. Our ancestors understood the importance of marking the end of Winter, the return of light and the time to plant new seeds, literal and metaphorical.

- The government wants this new bank holiday to honour frontline workers for their efforts throughout the pandemic. A beautiful and timely idea. Brigid was famous for her healing powers and compassionate care for the sick and poor. The perfect icon for our times.

- Spring is the off-peak season for tourism. In fact, nothing happens in Ireland between New Years and St. Patrick’s Day [and] this is when we need to increase visitors, revenue and lift the public’s spirits!

- In Ancient Ireland, she was an Ulster Goddess and a Leinster Saint. An All-Ireland icon for a modern, inclusive Ireland, while honouring all beliefs and none.

- Already Ireland has three bank holidays dedicated to men - Jesus, Stephen and Patrick. In the 21st century, we still are waiting for a bank holiday to celebrate an Irish woman and Mná na hÉireann (Women of Ireland). If Ireland lights up the world green for St. Patrick’s Day, surely we should be illuminating in honour of women.

Previously political party Fine Gael suggested November 29 as the bank holiday date, but the public showed strong opinions against this idea due to it coinciding with the American holiday, Thanksgiving.

What do you think? Should St. Brigid's Day be Ireland's newest public holiday?